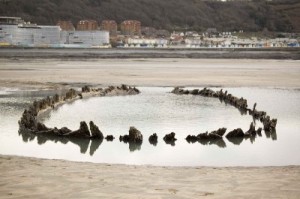 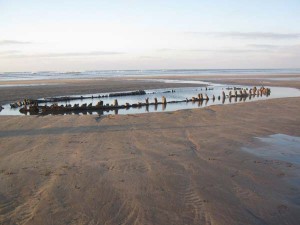 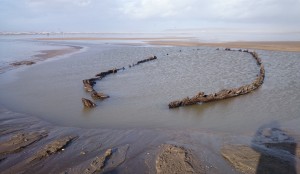 Mr B D Hughes has researched this wreck and trying to date it. He has taken samples with permission given by Alison Mills the Museums Officer as the wreck is in the North Devon Area of Special Scientific Interest, together with members of the School of Geography and Environmental University of Oxford and others.

Mr Hughes says that the size and shape of the wreck has intrigued him since first seeing it in the mid 1960’s, its periodic appearances had been commented on in books and local newspapers since 1850’s when it was described as a ‘very old wreck’.

In the 1940’s and 50’s it was described as a ‘Viking ship’ and a ‘Spanish Galleon’. During the summer of 1973 it was photographed and noted by the Army Experimental Establishment based at Instow, who were doing beach trials at Westward Ho!, but no clear indications of its origins could be found from the remains then exposed.

It became clearly visible again in 1997, Mr Hughes made a rough diagram of its structure which was then 82ft (25m) long and 23ft (7m) at its widest part. The present wreck measured in Feb 2005 is only 77ft (23.5m) long as the stern post has fallen forwards and sideways.

The outer planking is of Oak and ceiling or inner planking is 50mm thick and also oak.It has been suggested it could be to be one of the following ships:

No other wrecks of sufficient size are recorded until mid 19th century and that one, the Pace, wrecked 28th December 1868 was later salvaged.

The remains could be the Sally but until further research is undertaken it still remains a mystery. The dating of the wreck is not only of interest to maritime historians, it is also of importance for the study of coastal erosion and the movement of the pebbleridge. It is suggested that due to the position of the wreck to the ridge it suggests that the ridge has moved faster than previously assumed. The ridge has moved about 350m in 235 years.

Information from B D Hughes. More information on local wrecks can be obtained from the Devon Historic Environmental records on Dendrochronology from English Heritage and Coast Erosion at Westward Ho! from Peter Keene Classic Landforms of North Devon Coast 1986 (Thematic Trails) 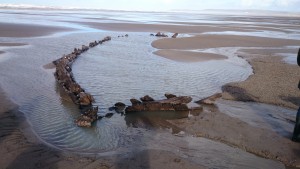 This is a smaller vessel, approx 50ft long.

It has been considered that it could be a Polacca Brig (the hull the right size) typical of the type trading in Bristol Channel, North Devon and Taw Estuary, used for moving limestone and coal.

Mr Hughes says more research on the list of shipping for 1790-1830 needed. 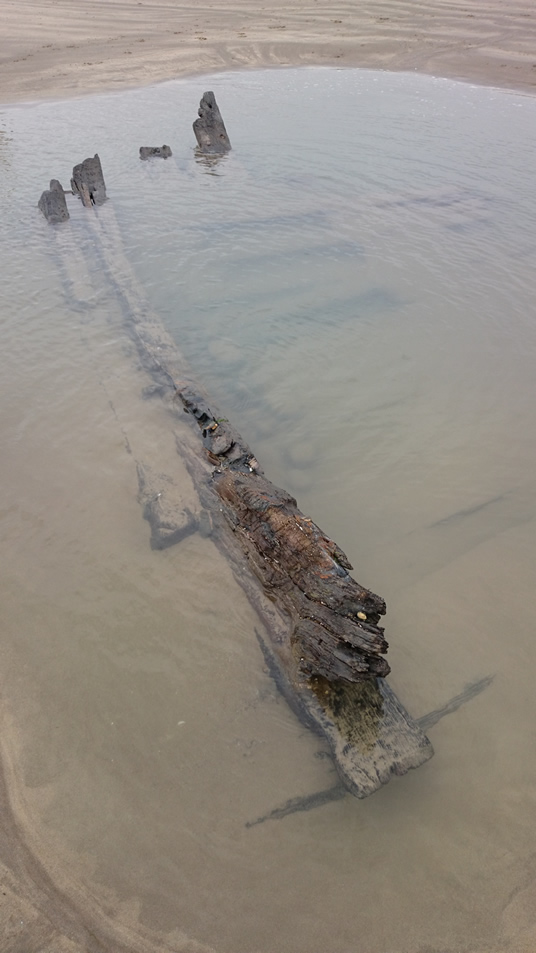 On 26th July 2015 the above wreck, or part of a wreck, was discovered by Jon Webb. No-one seemed to be previously aware of its presence on the beach, and it has since been re-covered by sand.

Close to the ‘third wreck’ are what could be an additional section to it. The lay of the timbers show that this is not one large wreck, joined. It could be the same ship, but broken…. 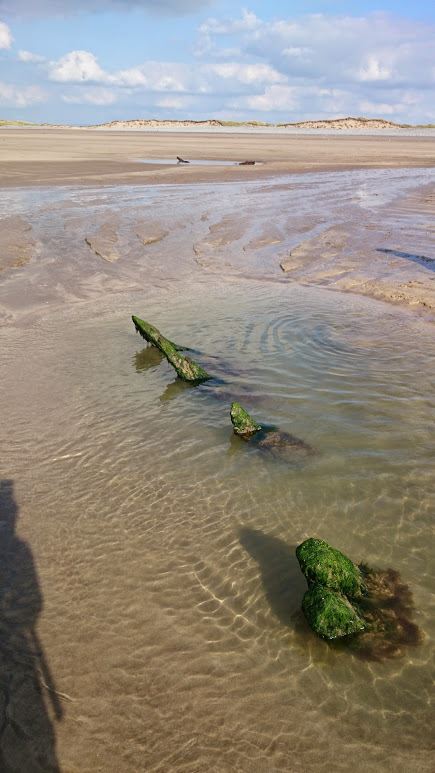