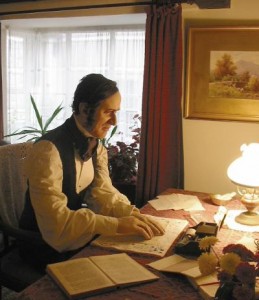 (Picture taken in the Clovelly Museum )

CHARLES KINGSLEY  finished his novel “Westward Ho!” in 1855 and it became an instant best seller.  By 1897 it had been reprinted thirty-eight times and really brought the North Devon coast to the attention of the Victorians.

Even though it was a swashbuckling novel about conflicts between the English and Spanish his loving descriptions of North Devon has never been bettered.

“All who have travelled through the delicious scenery of North Devon must needs know the little white town of Bideford, which slopes upwards from its broad tide-river paved with yellow sands, and many-arched old bridge where salmon wait for autumn floods, toward the pleasant upland on the west.  Above the town the hills close in, cushioned with deep oak woods, through which juts here and there a crag of fern-fringed slate; below they lower, and open more and more in softly rounded knolls, and fertile squares of red and green, till they sink into the wide expanse of hazy flats, rich salt-marshes, and rolling sand-hills, where Torridge joins her sister Taw, and both together flow quietly toward the broad surges of the bar, and the everlasting thunder of the long Atlantic swell.“

Kingsley was living at Northdown Hall in Bideford when he wrote Westward Ho!, one of his favourite haunts was the beach and the pebble ridge where he used to employ quarrymen to move large boulders so he could examine the marine life underneath’.

Kingsley never visited the new resort of Westward Ho!  and never disguised his abhorrence of the project, in a letter to Ackland in 1864 he summed up his attitude thus:

How goes on Northam  Burrows scene for spoiling that beautiful place with HOTELS and VILLAS I suppose it must be, but you will frighten away all the sea-pies (oyster catchers) and defile the pebble ridge with chicken bones and sandwich scraps.

Rumour has it that he had an argument with Molesworth (one of the main directors of the scheme and also his friend and landlord) about the name and they never spoke to one another again.