For, as long, as I can remember, I have always wanted my own horse.

I wished for one, every time I blew out the candles on a birthday cake, asked Santa each Christmas and so on. I even came up with an idea that if I married a rich farmer, when I grew up, then I would get my horse. Years later, I mentioned this to my son, to which, he replied, “Oh, mum, you ended up with dad!” I think I did extremely well there! But still no horse. 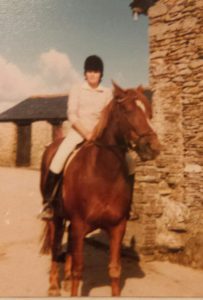 When I was a child, we often went, as a family, to Westward Ho! beach, we were excited to discover that there were donkeys there giving rides, surely a donkey is similar to a horse, isn’t it? My sisters and I approached the donkey man, who we later found out was named Pete, and asked him if we could help, with his donkeys. He said, “Yes,” after all, this meant that he could sit back in his deckchair, topping up his tan, while we did all the leg work, he still took the money and would lift tiny children onto a donkey.

One day, we arrived at the beach, before the donkeys. The tide at Westward Ho! comes right up to the pebble ridge, leaving no sand, so the times the donkeys worked depended on the tide times, this worked in our favour, as when the donkeys arrived, in the converted horse box, it meant we could also help to tack them up (put on the saddles and bridles), meaning being able to spend even more time with them. We then walked the donkeys over the pebble ridge, something that had to be seen to be believed, many tourists took photos of this. 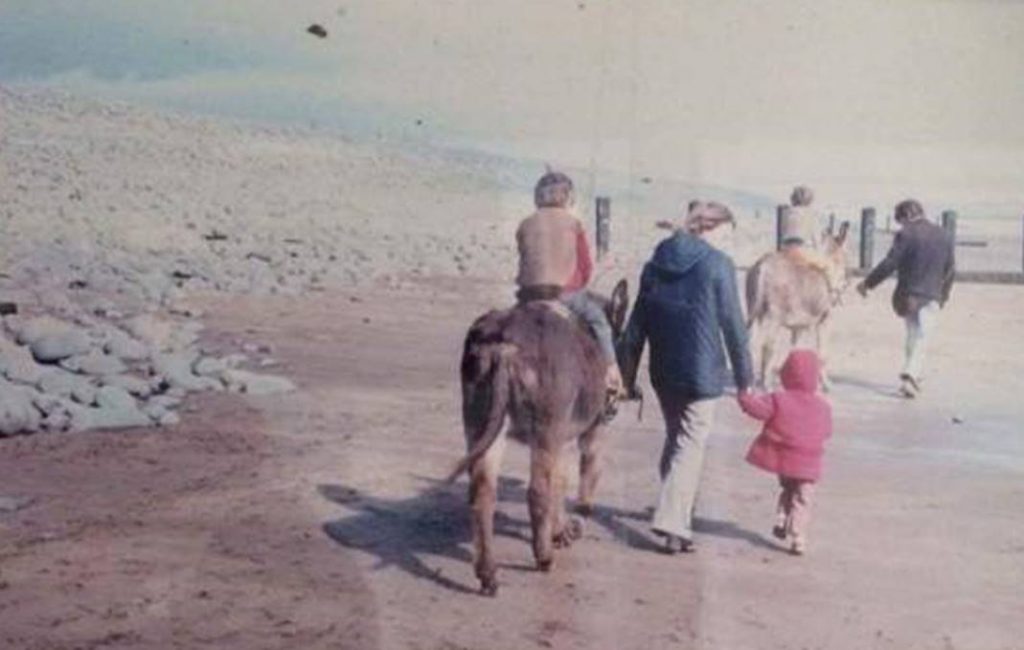 Once on the sand, one of us, often me, would take an empty bucket and go in search of fresh water, the nearby amusement arcade were happy to supply this. We then waited for children to come for rides, if my memory is correct, it was 50p a go. We basically, lead a donkey each a short distance along the sand, turned around and went back, Pete owned 13 donkeys, in total and I must say, they were extremely well looked after, the reason he had so many, was so that he could vary which ones he used, giving them a day off from time to time, as he only used 3 or 4 each day. They all had their own characters, my favourite was called Crumpet.

We also went to several donkey derbies, because we knew the donkeys so well, we worked out that if you were given the best donkey and managed to stay on then you would likely win. Sometimes there was a tote, where visitors to the donkey derby were encouraged to place small bets on the donkeys and riders. (I think profits went to local charities). We used to make bets, using our pocket money and knew that if a child had their own riding hat, rather than one supplied by the event, it usually meant that they knew how to ride and therefore, if they were given a fast donkey, they would likely win. We came away in profit, more often than not!

Pete made sure that we got the best donkeys, for our races, as a reward for all our help at the beach. Other riders, who didn’t help, complained, once that we were being favoured, so the organiser decided that he would allocate the donkeys to riders, rather than Pete. Lucy, a slow donkey, was chosen for me, however, when I given my animal to get on, Pete gave me a sly wink. Once mounted, I leaned forward to pat Lucy’s neck, it was then that I realised why he had given me a wink. I had Crumpet, my favourite and fastest donkey, to the untrained eye, Lucy and Crumpet were identical, until you stroked them, Lucy, you see, had been used to pull a cart, before becoming a beach donkey and therefore had a muscly neck. Once again, I won my race and as the organiser had thought he had chosen my donkey, there were no reasons to suspect foul play, so we were never questioned again. I would now like to apologise to any child who was beaten by myself, but that’s life and you can’t win them all!

Sadly, I never did get my horse, but spent several happy years riding other peoples horses, until I suffered a stroke and had to give it all up. I am hoping to have a go at riding for the disabled next year, so watch this space.