An oil painting by Major Moore: 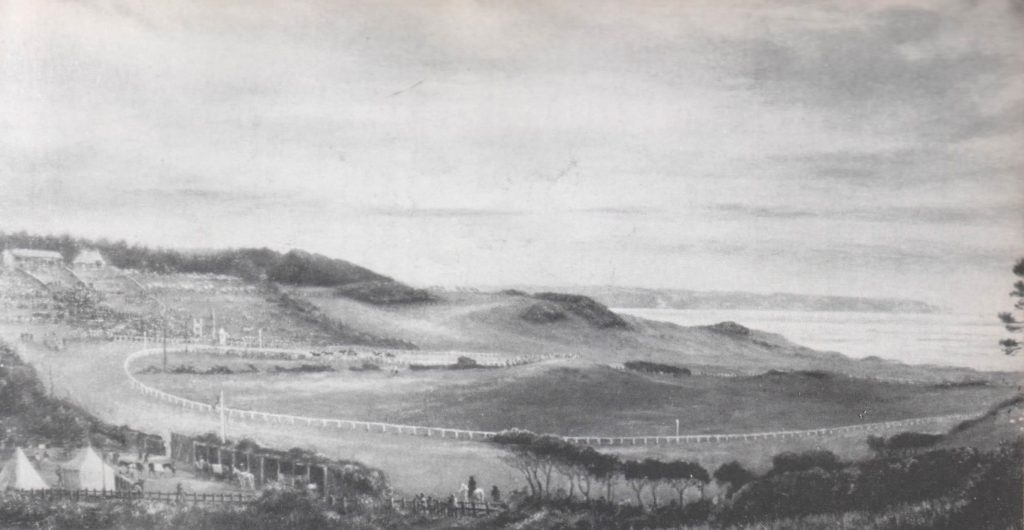 From an article in the Gazette:

The name Shebberton means little to most people nowadays, but on September 27, 1922, it was the centre of attraction as people from far and wide flocked to watch the first race meeting on a brand new course.

Shebbertown, as it is properly known was the original name of Abbotsham Court until 25 years previously and Mr Skidmore Ashby-described in the Gazette at that time as “the moving star in the excellent organisation which has created the first properly laid out race course in North Devon” decided to revive the name. It was, said the Gazette the “most beautifully situated race course in England.”

From the Gazette archives comes this description “It is admirably situated giving a magnificent view of the Bay from Croyde to Hartland Point with Lundy in the distance and with a vantage position for spectators to obtain uninterrupted views of the racing from start to finish. The actual course runs along the valley of Abbotsham Court and Cornborough and is practically level except for a gentle slope rising to the straight run home.“

The one and a quarter mile course was scheduled for pony and Galloway races and as the Pony and Galloway Racing Association had come to an end in 1928, rules were specially drawn up. It was hoped the races would give a fillip to the breeding of ponies and Galloways in the district.

The first race meeting, it was reported was a brilliant success that augured well for the future. The day was fine apart from “an ungallant shower of rain during the ladies race” and “dozens of motor chars-a-bancs, motor cars and vehicles of all descriptions” crowded the site.

There was music from the members enclosures and “a large number of bookmakers.” Stakes amounted to £150 and the races had names with a local flavour – the Westward Ho! Stakes, The Abbotsham Plate, the Bideford Plate, the Shebbertown Club cup, the Ladies Hunt Cup and the Farmers Plate.

The setting was beautiful and the sitting ideal “there is no other race course in England where spectators can enjoy a start to finish view without the aid of stands” wrote a Gazette reporter.

Perhaps that is why the planned grandstand was never built although the members enclosure boasted changing and refreshment rooms.

The building is all that remains for the Shebbertown Club was short lived. Ill-health caused Mr Skidmore Ashby to abandon his plans and the whiteposts and rails he had erected around the course to Tattersalls standards were dismantled, although local people can remember greyhound racing on the course.

His widow, who later become Mrs Kierander, and who is now in her 80’s now lives in the converted building which she calls “The Old Race Course“. After the death of Mr Skidmore Ashby she moved away to Surrey but when years later, on her return she heard the building was up for sale and she bought it back.

Sitting in her living room,once the verandah of the refreshment rooms, and looking out to sea, it is difficult to picture the time when the peaceful valley was full of life and colour of a racecourse.

A view of the racecourse, as seen in the oil painting, taken recently: 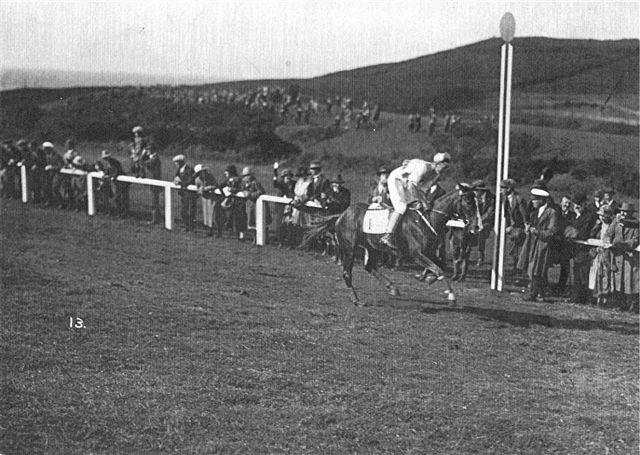