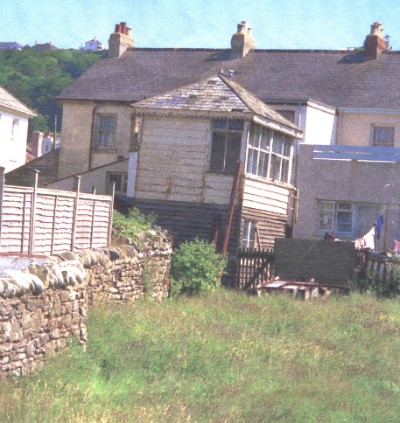 (the mystery of it!)

In the back garden of number 7 Springfield Terrace this wooden superstructure of a former railway signal box, used by the owner as a workshop. Research done by Tim Edmonds from 1988 has tried to find the answers to this mystery its place of origin or its date of arrival. It became a local landmark, some local residents have memories of the box at Westward Ho! in the 1920’s or have been told of it by relatives or friends, this oral evidence agrees that it arrived in the period immediately after the First World War.

Tim decided that the box had been removed from a railway location to this site during the period 1918 to 1930 probably before 1925. Due to cost and difficulty of transport that it was most likely to have originated in the local area. He examined North Devon signal boxes that closed in the first quarter of the 20’th century.

The house was owned by a W Jordan in late 1930’s but a cutting from a newspaper about 1980 reporting from an auction of the property that the signal box was transported ‘by prominent antique dealer Fred Bishop’. Bishop operated a business in Bideford from the turn of the century until at least 1939 delaing in both antiques and furniture and upholstery. Although he seemed to have owned no.7 and no.8 it was Jordon who lived there.Jordon being a employee of Bishop. It was possible that the signal box was put there to be used as a garage.

Information from Journal of the Railway and Canal Historical Society Vol 32 part 3 November 1996 by Tim Edmonds.

The signal box was dismantled in 2001 by a railway enthusiast who has a garden railway situated near Newbury, here it is intended to be re-assembled.