The Pebbleridge of Westward Ho!

The History of the Pebble Ridge

The round, grey cobbles of Westward Ho! Pebble Ridge are all made from beds of fine-grained sandstone which are common in the cliffs of Bideford Bay between Westward Ho! and Hartland Point.

In the cliffs, the grey nature of this sandstone is not easy to see because the beds have many iron-stained joints that give the rock an orange or brown appearance.

However, when blocks of sandstone fall from the cliff onto the shore, wave action soon removes the iron staining, revealing the purer grey rock beneath. The blocks are gradually rounded by banging against each other until the familiar round pebble is produced.

The shore between Westward Ho! and Clovelly has a continuous cliff-foot ramp of these pebbles which, under the force of Atlantic waves, are trundled north eastwards towards Westward Ho!

The number and speed of the pebbles moving eastwards seems to have varied over time, probably depending on how often cliff land slides occurred, each providing fresh rock debris for the waves to work on.

At times of plentiful supply, the pebbles were pushed along-shore beyond Westward Ho! creating a spit or ridge in front of Northam Burrows. The line of this ridge was probably controlled by the general direction of the cliffs to the west of Westward Ho! Such spits are often called ‘drift aligned’.

Early maps and descriptions suggest that before 1855 the Pebble Ridge only reached as far as Sandymere, beyond which were sand dunes, shingle banks and probably a gravel spit. Even at this time the ridge was being constantly pushed landwards at a rate of about 1.5 metres a year.

Over the last 100 years the number and size of new pebbles arriving alongshore from the cliffs has been in serious decline, resulting in the ridge being lower and weaker. The authorities tried reinforcing the Pebble Ridge at Westward Ho! by transporting pebbles from the Grey Sands end of the spit but this supply has now run out and this replenishment has been discontinued.

A weak ridge is more likely to be overtopped by storms which at times will also breach the ridge where it is weakest or where wave power is concentrated. A smaller, weaker ridge can also be more easily moved by waves, which could naturally change the direction of the ridge faces until it is reorientated to face incoming waves at right angles. Such spits are called ‘swash orientated’.

Whatever ones view about the future of this beautiful coastal feature, any engineering attempt to thwart these long-term natural adjustments to the shoreline is likely to be very expensive and the cost is likely to increase exponentially over time.

The north west gale was felt with considerable severity at Westward Ho! on Monday night the early hours of Tuesday morning most of the bathing boxes were blown over on the pebbleridge and many of them badly damaged.

On the cold Saturday afternoon March 31st Peter and Janet Keene led a walk along the beach and pebbleridge at westward Ho! in the company of some 40 members and guests. Peter suggested that the theme of the walk should be the dynamic nature of both the Pebbleridge and Northam Burrows and how even within historic times, the nature of these environments has undergone dramatic change. On the beach the inner peat bank was visited demonstrating that in Roman times most of what is now Westward Ho! beach was a protected estuarine fresh-water fen, presumably at that time some way inland from the sea shore. A wooden wreck (circa 1800) exposed on the beach at low water, some 300 metres from the present ridge suggesting that the ridge has on average been retreating some 1.5 metres a year for the past 200 years. This trend has only been curtailed at the Westward Ho! end of the ridge by the 1932 sea wall and in the past by periodic beach replenishment schemes. Peter pointed out that the situation beyond Sandymere is even more volatile. Old navigation charts show the split periodically disintegrating and reforming and there is little to suggest that these cycles will not continue. This natural cycle would really have had little consequence but for the bizarre council decision to allow the dumping of waste north of Skern, long after the unstable nature of the coastal site must have been known . An added complication is the ,as yet unproven suggestion that the dump may contain toxic waste. The present appearance of much of Northam Burrows is the product of modern drainage and grazing. A more natural burrows with salt marches and meandering streams is today only a memory recalled by painting such as those by Thomas Girtin. A rising sea level associated with climatic warming suggests that this,indeed will once again be the natural landscape of the burrows.” 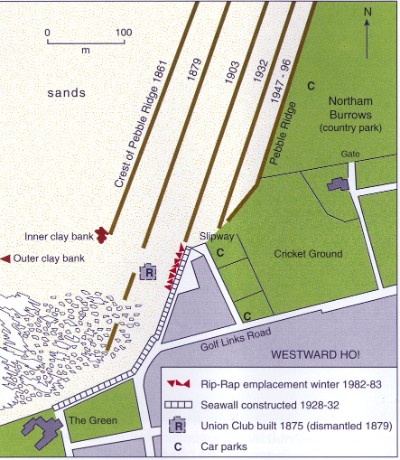 Retreat of the ridge 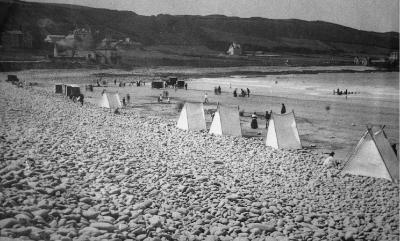 Tents on the beach 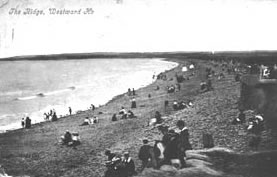 Early view of the ridge 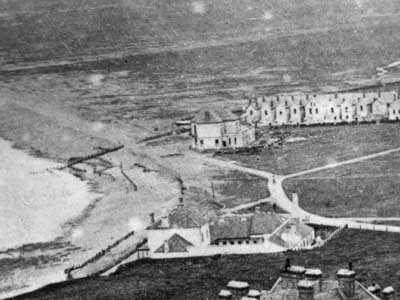 Early view of the Union Club on the beach 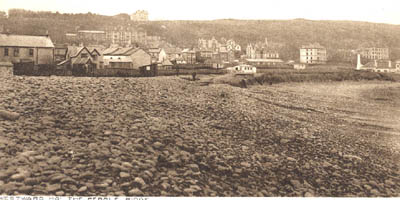 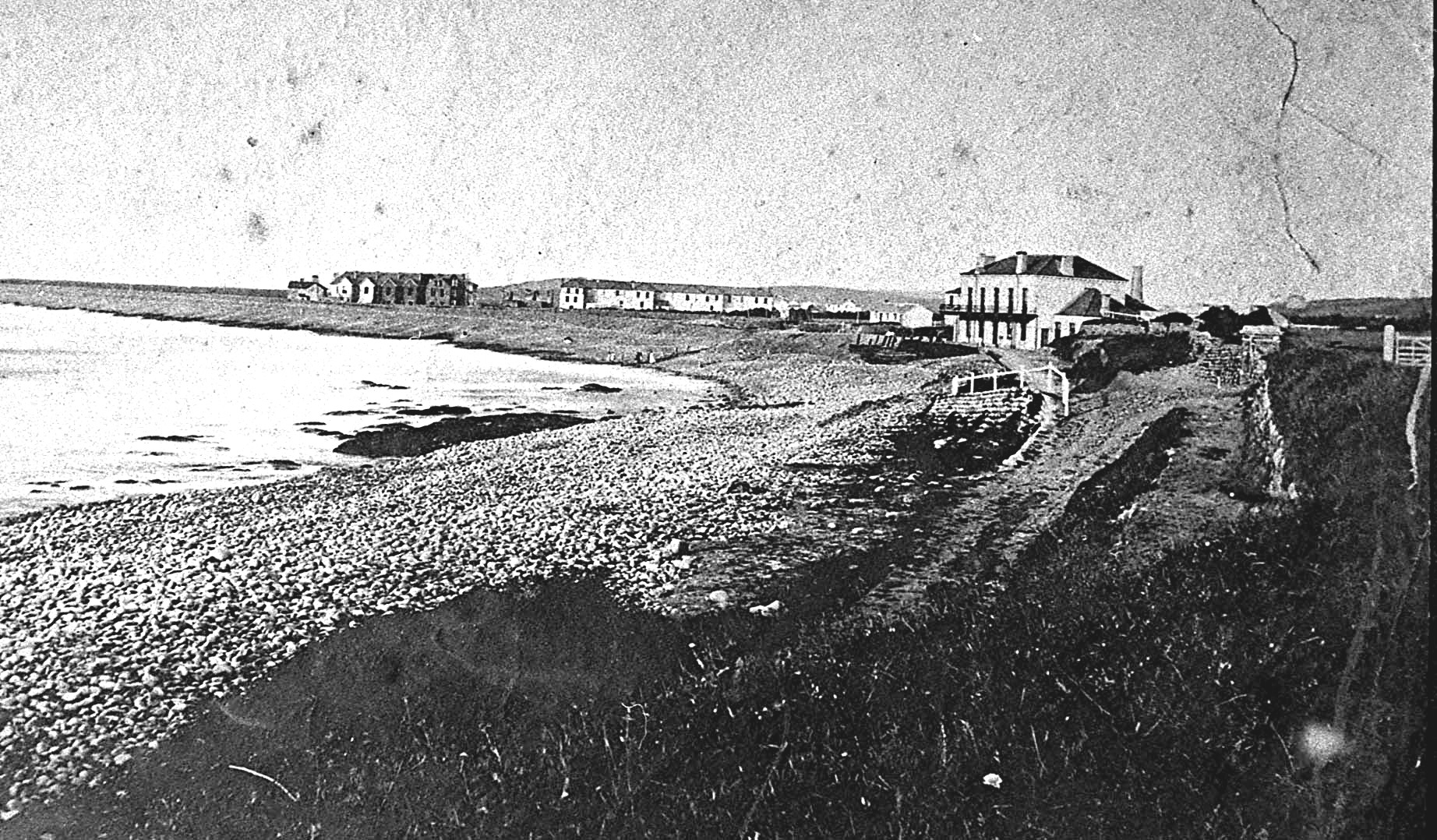 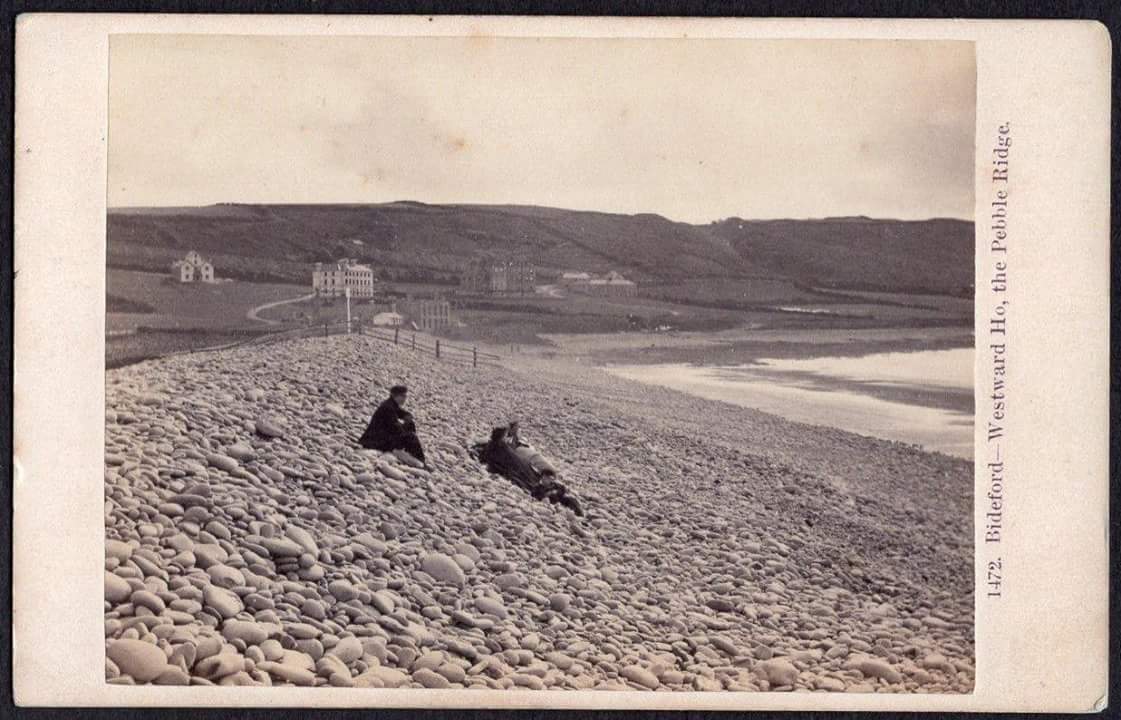