Westward Ho! had a Pier- ‘before its time’ some said

The Northam Burrows Promenade and Landing Pier Company was formed in 1864 during the very early stages of the development of what was to become the resort of Westward Ho!

However, work did not begin until 1870, following a public meeting at Bideford in the February of that year when Mr J. Pine-Coffin was elected chairman of the pier company and Captain Molesworth and Colonel J.R. Wheeler were named as principal shareholders. The remaining shares were soon taken-up (principally by businessmen involved with the development of the resort) and Joseph William Wilson’s design for the pier was formally accepted. Wilson was a noted Victorian engineer who had worked on the Crystal Palace in 1851.

Wilson’s design was for a typical cast iron pier of the time incorporating cast iron screw and embedded piles supporting cast iron spreading brackets. These carried 12 inch x 12 inch timber baulks running longitudinally, which supported transverse joists and the wooden decking. The pier was to be 600 feet long, with a neck width of 16 feet, leading to a pier head 86 feet x 52 feet upon which a bandstand and refreshment room were to be placed. Interestingly, Wilson’s design was also accepted by the Hunstanton Pier Company in Norfolk, although their pier (opened in 1870) was to be slightly longer (at 830 feet) then the Westward Ho! Pier. The contractor was announced as J.E. Dowson, who had worked with Wilson on the construction of the pier at Bognor (1864-5).

However, following the death of Dowson in 1868, a Mr Gooch (who had assisted Dowson at Bognor) was appointed as contractor. He had quoted a price of £4,390 to build the pier; the price per foot forward being £8.18.Od.

The nailing of the first plank of Westward Ho! Pier was officially carried out by Mrs Moore-Stevens, wife of the High Sheriff, in early August 1870. In addition, the Reverend Isaac Gosset blessed the proceedings with a prayer. For her trouble, Mrs Moore-Stevens was presented with a silver nail. Work proceeded apace, but Gooch found the pier notoriously difficult to construct. Poor sea conditions meant pontoons were dangerous to use and each stage of the pier had to be fully built so it could be used as a platform for the construction of next phase. There were also problems with the structure’s stability, in spite of divers being employed to concrete the supporting piles into the rock.

Nevertheless, in July 1871, the first landing on the still unfinished pier took place when the Spicy, carrying early closing day trippers from Bideford, anchored a little way off the pier and were rowed to it in a small boat. Upon landing on the pier, they were met with hearty cheers and glasses of champagne by a reception committee.

Unfortunately, disaster struck in October 1871 when gales snapped the cast iron supporting pillars ‘just like tobacco pipes’ and only 150 feet of the pier remained useable. Gooch estimated £1,300 was needed to repair the structure, and when the pier company balked at the cost, he went home. Local man John Abbott of the Torridge Works, Bideford was eventually contracted to repair the pier to a reduced length of 493 feet at a cost of £975.

Gales continued to wreak havoc during the rebuilding work, but on 24th July 1873 the pier was finally opened to the public. Admission onto it appears to have cost 2d, taken at two attractive toll houses provided at the entrance, but otherwise the pier was a plain structure. Judging by the few pictures of the pier that have survived, the proposed bandstand and refreshment rooms were not provided.

On 29th June 1875, the pier celebrated the opening of the Great Nassau Bath with a 1000 guest ‘Monster Picnic’. This was followed by a rocket line demonstration fired from the pier head to a ship in ‘distress’ nearby, and a quadrille band performance in the evening. Sadly, this was to prove the high point of the pier’s troubled life for following yet more storm damage in February 1880 it was closed. Demolition soon followed, with the materials being acquired by George Taylor, a local hotel owner. However, the North Devon Maritime Museum at Appledore has a section of the piers decorative railings rescued from a Westward Ho! Garden, while remains of the piles supporting the pier head my still be seen at low tide.

Memories of the pier

A report in the Bideford and North Devon Weekly Gazette of August 17 1937 recalls the memories of a Mr W J Pursey of Brent Tor, Westward Ho! whose father was a coast guard in the district. Mr Pursey said that he had fished from the pier many times and seen shark off there five feet long. He remembered seeing basket carriages, pulled by ponies, being driven around the pier, turning in the square at the end. According to these memories it was during the Easter Holidays – either 1879 or 1880 although he fancies it was the same year the United Services College opened in January – that he came from Greenwich School and saw the Pier was as if drunk. From about half way along it was all on one side’.

That was the beginning of the end. It was demolished shortly afterwards. One of the little summer-house arrangements at the front stood for a number of years in front of the Golden Bay Hotel. Quite a good proportion were incorporated into the Kingsley College in the erection of a veranda.

Mr Pursey remembered that the pier was very popular maybe being 50-100 people on it at a time on a fine day in the summer. The pier was never a success for the bigger boats to call as it had to be half to three-quarters tide for them to get alongside. The seats were taken from the pier and moved to the Bideford River Bank, where they remained for many years. Railings from the pier were also moved to Leigh Crescent, Northam. 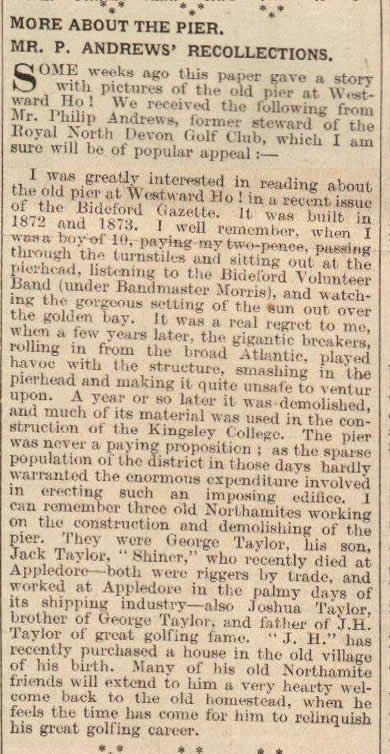 Views of the remains of the pier today: