also known as The Royal Hotel, and later ‘Golden Bay Hotel’
(The land is now occupied by the ‘Ocean Park Apartments’) 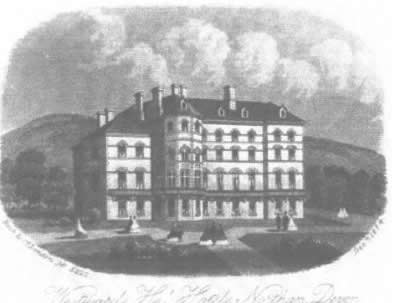 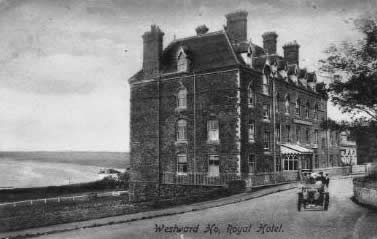 Despite the winter weather, around a thousand people joined in a gala and festivities as the Foundation stone was laid. (this stone has never been found)

By the time the Hotel was opened in June the following year, Victorian marketing men had dreamed up the name The Royal Hotel. The owners asked Charles Kingsley to perform the opening ceremony, at first he declined believing that the development of the area would ruin its rugged beauty, so a quick change of name was undertaken. The Hotel became The Westward Ho! Hotel. Charles Kingsley attended, took his cheque and it is said never came near the place again.

Later the Hotel reverted to The Royal Hotel at the beginning of the 20th century when it was trying to compete with other top class hotels in the West Country. The Hotel contained 33 luxury bedrooms and the 75 acre of land around it was quickly developed. By the next summer (1866) a matching villa had been built 100 yds to the East. This large square building in now known as Golden Bay Court, opposite the Church. This building catered for the servants staying in the Main Hotel, plus any minor customers.

A square building on the sea front was the original hotels “Ladies Baths”, with water supplied from the sea by Steam Engine. Men could use these baths at certain times, otherwise after using a bathing machine to change their clothes, they had to brave the sea.

Refreshments were sold on the ground floor of the Ladies Bath and the first floor was occupied by a large well utilised ballroom. The swimming bath itself ceased to exist a long  time ago, it is now under waste ground to the land ward side of the building.

Access from the Hotel and its Villa to these areas was also a sunken (and now overgrown) roadway known as Sandy Lane.

The ground between the hotel and sea had bowling greens, now the top square of Continental Chalets. A hydrangea walk, and also vegetable gardens on the right hand side of the site.

Access to the village from Bideford was through Northam along Bay View Road and down the steep Stanwell Hill. On the corner at the bottom were stables, together with Public Bar for the ostelers and coachmen. It has now been converted into bijou residences with paved inner courtyards and named The Rocks, previously called Tap. During inclement weather horses were fitted with spiked shoes for the steep hill.

During the 1920’s and 30’s Westward Ho! status as a premier holiday resort and in particular its great hotels slowly lost ground as other resorts opened up or offered more in the way of amenities and entertainment. The Golden Bay tea rooms built early 1900’s between the hotel and its annex became The Anchor Public House.

Purchased by Continental Chalets in 1994 and the venue for the new club and entertainment centre. In 1963 the Hotel, by then known as Golden Bay Hotel, closed down. 90 Chalets were built in its grounds and the larger rooms in the Hotel were divided up to become 14 superior grade holiday flats.

In 1976 the Tennis Courts on the other side of Atlantic Way facing the Hotel entrance were sold off and had the 12 houses built on them that exist today.

In 1994 the process of shrinking from 75 acres in 1864 to less than 5 in 1993 was halted when Continental Chalets purchased the Anchor Pub to be a part of the site once more.

The Royal Hotel / Westward Ho! Hotel / Golden Bay is now an apartment block called Ocean Park. ‘The Villa’ as it was known having been built as an annexe to the Hotel became a prep school. The Teighmore Preparatory School moved here from Ilfracombe. The Headmaster Mr C Middlemoor-Whithard M.A.

NOTICE – The Royal Hotel Westward Ho! will in future be known as The Golden Bay Hotel and Royal Hotel.
As soon as the necessary alterations, re-decorations, and re-furnishing are completed, the Hotel will be re-opened and carried on a first Class Family Hotel with Electric Light and every modern convenience. All enquiries to be addressed to Manageress.

The License of the Royal Hotel has been temporarily transferred to the Manageress Mrs Rolf from the Rougemont Hotel Exeter.

Westward Ho! The Golden Bay Hotel and Royal Hotel will be opened on Monday next 20 May. The extensive alterations and improvements have been completed, the Hotel now ranks amongst the most comfortable and best equipped Family and Residential Hotels in the West of England.

Magnificent sea views can be obtained from the spacious new lounge and new dining room which will bear favourable comparison with the largest and best Hotels in the country. Special attention is being given to the cuisine and the choicest of Wines have been stocked in the exclusive cellars.

New lavatories and bathrooms have been added and the whole of the sanitary arrangements which are of the latest and most approved pattern have been officially declared perfect.

For Sale with immediate possession the following property. The Large freehold building known as ‘The Villa’ lately used as a Boarding House with the land adjoining comprising 2 roods, 25 perches or thereabouts. 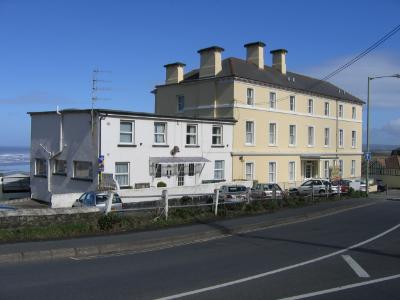 The annexe to Royal Hotel / Golden Bay known as “The Villa”