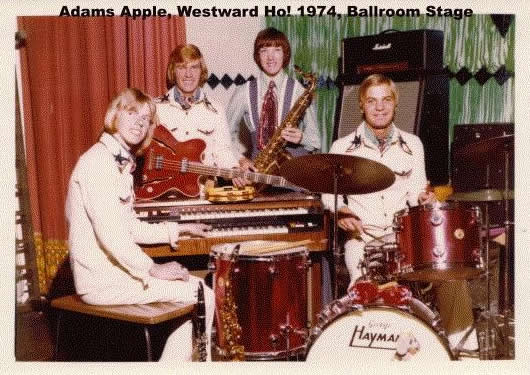 By strange chance I have been introduced to your website which has lots of entertaining information of interest to many people. I thought that you may possibly be interested in my own recollections of Westward Ho and the time that I spent there.

I actually worked at the top camp as it was locally known, Westward Ho Holiday Centre as it was known to the many who spent their holidays there during the summer months. I worked there at the beginning of the early 1970’s in particular the summer seasons of 1974 and 1975 and worked in the band which performed six evenings per week. The camp was a busy place then with a small army of staff which catered for the many holiday makers who came from all over the UK and during the opening weeks and closing weeks of each summer season we had various disabled and senior citizen groups who would stay complete with their own care staff. The camp was owned and operated by Travco Hotels a subsidiary of the Co-Operative Society. The manager was a gentleman by the name of Red Kilan, a large cigar smoking man who lived in the large white and green house situated just behind the tennis courts near the outdoor swimming pool and who as I remember drove a white Rover V8. Many a party was held at this house mainly for the entertainments staff who invariably would all get roped into doing what Red called one of their turns!

You have said that a blue coat by the name of Mike Hudson was the entertainments manager at the camp, I remember Mike well and he was a blue coat during the seasons of 74 and 75 and hailed from the Liverpool area. A chap by the name of Terry Dale was the entertainments manager during those seasons and he was a compare and comedian and his wife Kathy was a bluecoat who sang very well. The band that I performed with was called Adams Apple and we had our own comedy bandshow which was always on a Wednesday evening and often we had a good 450 to 500 audience. Holiday makers would arrive on a Saturday, On Sunday evenings saw a full bluecoat show backed by Adams Apple with the likes of Mike Hudson performing songs like “Is this the way to Amarilo”. There was a upstairs lounge bar but no bar in the main ballroom until some years later, the other bar was overlooking the cliffs and also had a resident pianist/organist entertainer Frank Jackson who haled from Leeds. Terry Dale the entertainments manager used hold a popular Old Tyme Music hall evening in which he played the chairman.

The camp had kitchen and waitress staff from all over, some from Scotland others from Manchester like my then girlfriend Lorraine Sharman who came from Manchester but still I think lives in Westward Ho or Bideford.

We kept in touch for many years after but I have not been in contact with Lorraine for a good 20 years now, we had many a laugh at the camp and they were very happy days. If the weather turned bad which it did with frequent rain showers and wind the band would be pressed into service in the ballroom to provide afternoons of music for Tea Dances. There was a busy café at the rear of the ballroom which served hot snacks etc and this overlooked the swimming pool on one side and had a juke box with pop songs on it. There was even a hairdressing saloon on site where you could get your hair styled and cut.

There were two staff houses at the camp, which could be reached by walking up Cornborough Road or via the backway over the wooden bridge which took you across the sports field and more chalets. The first house was white a blue and was called “ Kipling Torrs or Windy Torrs, this was the house that the musicians and entertainers lived in along with a lady called Lil and her husband George Andrews. Lil oversaw the running of the camp accommodation like the laundry and chambermaids and her husband was a maintenance man who sorted out any problems with the fabric of the site. The other house was called “Old Stones” and this was one creepy house make no mistake and I can remember several incidents which were frightening and one that was a comedy in itself. There was a long driveway up to the house and at night in whole area including the road was unlit, in actual fact it was very dark, very dark indeed.

The house looked spooky and was very old with lots of history and tales of ghosts and hauntings. Inside Old Stones there was a room which was named by the staff as the coffin room. Once inside the room it was obvious why it was so named as it was long and rectangular and painted a cold blue colour, the house was musky and as you entered this house it had a long sweeping wooden staircase up the centre. The house seemed to have a presence all of its own and a fair few things happened there which could not be logically explained. The house always had a overbearing closed in oppressive feeling even when a party was in full swing and the girls who lived there often heard noises and footsteps in the small hours.

The swimming pool was the centre of outdoor fun, with the bluecoats running water polo, Beauty Contests, and other activities, the children had their own Nanny and kind lady named Win who kept them entertained with suitable games and walks down the pebblebeach via the cliff top zig zag path.

After the first summer season in 1974 Adams Apple departed to Tour Europe and returned the following summer of 1975 for yet more fun. Terry Dale and his wife returned as did Mike Hudson but we had two new bluecoat girls, a new male Bluecoat named Jimmy who’s surname escapes me but he hailed from Ireland and lastly two entertainers named Jimmy & Marny.

If this gets posted on the site I would like to say hi to all the guys and girl’s (you know who you are ) and hope that you are all well and happy with life.

Adams Apple still exists although not as the four piece band that it was back then. In our time a Westward Ho the band consisted of Ron Adams the bandleader who played bass guitar and provided vocals, Sandy Basden who played alto / tenor and baritone saxophones as well the clarinet who also sung. Steve (Gatsby) Foster played drums and provided vocals and assorted comedy both on and off stage !and lastly myself Bob Goodwin who played organ and piano.

Ron and Sandy went on to marry and now work as a successful duo in the Kent area and are still named Adams Apple. Steve married and raised children and is now a lighting and design engineer with a well known company who specialize in this area and he travels worldwide. As for myself I also married and raised two lovely children and run my own Electrical Service Company and recording studio but still find time to perform In a couple of different bands.