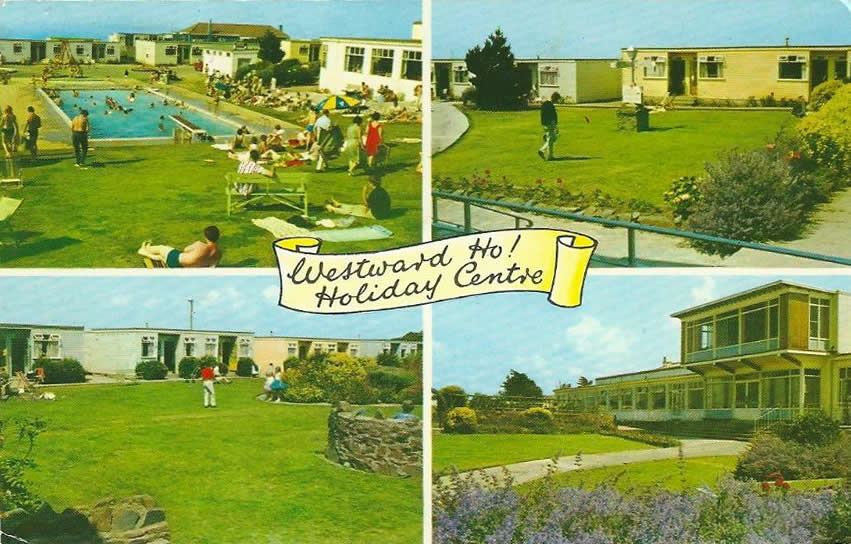 The card is postmarked 10th May 1971, the message reads  ”We are having a nice time, and being well looked after, our chalet looks out over the sea, the weather nice so far, there is plenty going on all the time”.

This photo’s must have been taken in 1967 or later because the swimming pool was a putting green before then. The ‘Scandinavian Quiet Lounge’ is in the bottom right of the card. 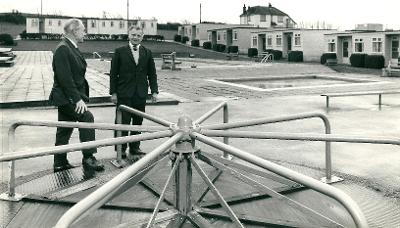 The Chalets at Top Camp

Top Camp Chalets showing the Manager’s house and the swimming and paddling pools. The left hand man was from the Electricity Council. Taken about 1970. 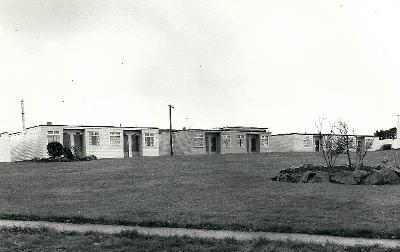 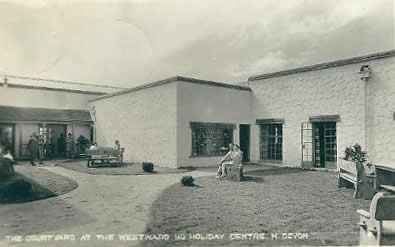 The postmark shows this from August 1939, so shortly after the Camp opened and before it was taken over by the army for the duration. The message reads ”Dear All, we are enjoying our holiday here, in spite of crisis. This is a very nice camp and pretty place….” 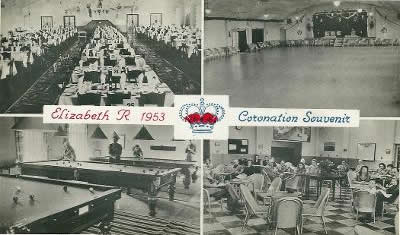 A ”Coronation Souvenir” postmarked August 1954 and showing the dining room (one of Ernie Weston’s murals is just visible at the far end) the ballroom, the snooker room and the main lounge. The message reads
”We are having a lovely time. Went to Clovelly on Sunday, it was just right, not too hot. This is a smashing Holiday Centre and plenty of good food. 2 hot meals a day”

My mum and dad moved to Westward Ho! just after the war, at the suggestion of an old army pal BOB MITCHELL , who worked at TOP CAMP. I was born in 1949 at The Grenville Nursing home in Bideford and we lived in WESTWARD HO! ,initially second floor flat at number 5 KIPLING TERRACE, I have just found some old rent receipts and the Rent was two guineas a week in 1946 when my mum, dad and sister first moved in. Then we moved to  NORTHESK in AVON LANE shortly after I was born and finally at 4 FOSKETH TERRACE, where we moved in 1955. Needless to say I don’t remember living at Kingsley/ Kipling Terrace but I do remember visiting a Mrs Mouncie (or Mouncy) who lived in the ground floor or basement flat and had a son called Billy, who was a bit of a tearaway in his teens. I went to KINGSLEY PREPARATORY SCHOOL(aka Miss Butterfield’s) until she retired in 1958. My dad worked at the TOP CAMP from when he moved down until it closed. he then went on to Braddicks until he finally retired in his 70’s.

I left home at the age of 19 so most of my memories are growing up in the village and working in school holidays at Top Camp. 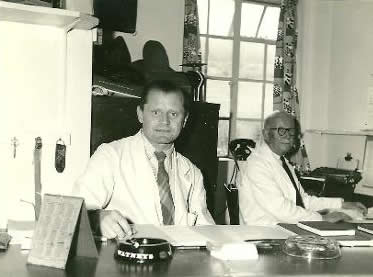 The picture in the Office is of Dad and a Mr Pavitt (? spelling) probably taken about 1962 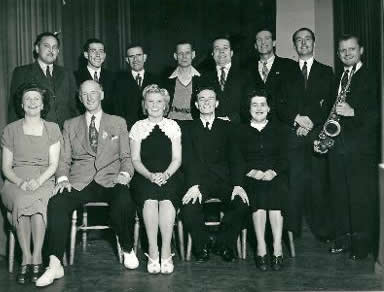 My dad (George Lilley- with sax) is on the far right, next to him is Bob Mitchell (uncle Bob to me) who subsequently became manager.

Two along from him is his brother Les, two along again is Harry Bendall, who was a general factotum and became Uncle bob’s housekeeper when the latter had a stroke in the mid 60’s. George Andrews is second from right on the front row (the lady next to him on the end of the row may be his first wife Ethel).

Mr Gillespie (manager) is the guy in the white shoes and I think the blonde lady is his wife but I could be wrong there.

A couple of long-term characters- notably Eddie Gourdie and Ernie Weston  don’t appear to be there for some reason. 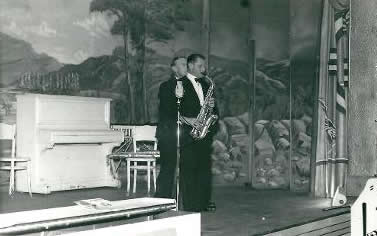 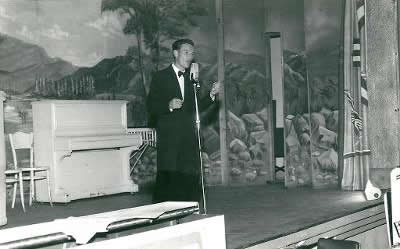 George Andrews singing, probably at the same concert. Note the scenery, all painted by Ernie Weston. 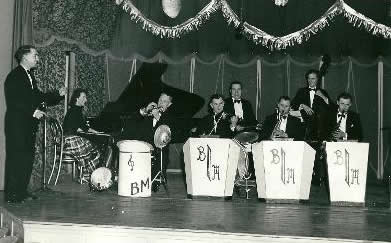 The Bob Mitchell Band shows Bob conducting, Les on drums and Dad(George) on sax. I don’t recognize the other band members. In fact, the band had a number of personnel changes, with the only constants being Bob, Les and Dad, who were old army chums. 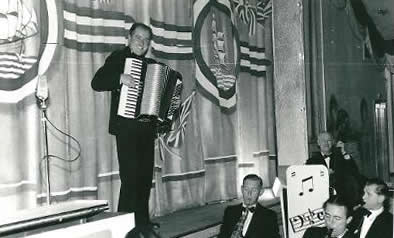 Bob playing his accordion, probably at a Sunday night concert. dad features in the band (of course) with Jack Woolley (who was also part of the maintenance team) on sax and Cliff Barnes on double bass.

Cliff wasn’t a Top Camp employee as far as I can remember. 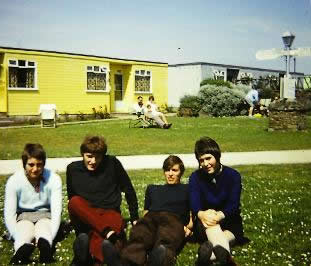 The first is of myself (maroon trousers), Malc Easton (school friend and fellow kitchen porter in ’68), with a couple of happy campers. Nice shot of some chalets.  Sadly, the direction signs written by Ernie Weston are out of focus. 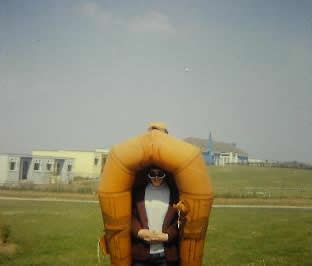 The second just is me being silly, but with the Grenville Bar painted a disgusting blue in the background.

The inside of the Grenville Bar, which was really nice, with one of the two bars being shaped like a galleon. 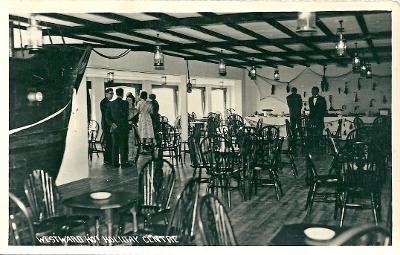 This is one of my prized possessions. I happened to be ‘down home’ just after the camp was bulldozed and went for a wander around the site. It was very sad, everything was smashed to bits and literally the only things I found were a glass saucer baring the Travco Hotels logo (which I still have) and an old sign, made and painted by the aforesaid Ernie Weston, who was a professional sign-writer by trade and also painted all the fantastic stage scenery and murals you can see in some old photos of the camp. The photo is of that sign, which was located at the bottom of the stairs leading to the “Scandinavian Quiet Lounge”. A postcard I have with four views of the camp and you can see the Scandinavian Sun Lounge in one of them. 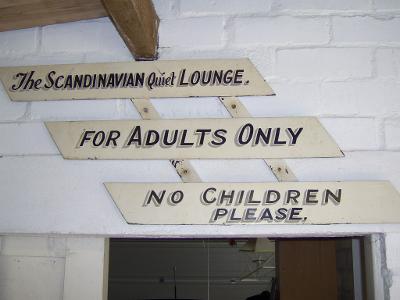 The sign had been thrown into some bushes and thankfully escaped the carnage as a result.