He was called up on 12th December 1940 and did his initial training at Longtown, Carlisle.

He was a Driver Mechanic and spent his time in Westward Ho! driving a brigadier. He was a very experienced driver as his family were car enthusiasts and he was popular with the top brass.

He managed to avoid most of the fitness training and failed the fitness tests.  The photographs of the men were taken by the army to raise morale at a time when spirits in the country were generally low.

He went to Normandy on D-Day and was really ill on the landing craft.

He was billeted with a woman called Mrs Propert who had a daughter called Dorothy.  Dorothy was a little bit older than Billy’s eldest daughter, Mary.

While Billy was in Devon the family received gifts of Dorothy’s old books which were very much appreciated. Mrs Propert also sent Billy’s youngest daughter, Margaret, a gollywog.

In the autumn of 1943, Billy sent the family a box of apples. Eating apples were so rare in the small mining village in Durham that other children used to run after Billy’s children to ask for the apple core.

From Normandy, Billy went to Belgium where he was billeted with a clog maker and sent Margaret clogs.
He went to Dortmund when the Rhineland was occupied and he drove a ration wagon. 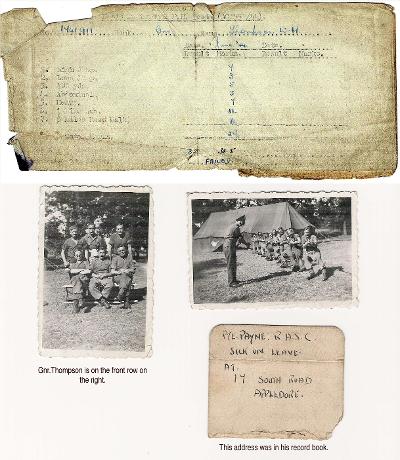