An article about top camp by Peter Christie, with many thanks for permission to reproduce it here:

Many people will have fond memories of Top Camp at Westward Ho! This was a holiday camp that also staged weekly dances and entertainments and was a mainstay of the tourist industry in the resort – but what is its early history given that it was one of the first wave of such camps established in Britain? The story, which can be followed in the pages of the North Devon Journal, reveals an amazing building scheme – which was dramatically mistimed.

The idea was first announced in late January 1939 when L.B.Braddick, an estate agent, announced to a meeting of the Bideford and District Chamber of Trade that ‘an option had been obtained on land at the top of Kipling Tors, Westward Ho! for the provision of a holiday camp.’ This was to be under the auspices of the Knickerbocker World Travel Federation and was to cost £34,000 and cater for 500 visitors at any one time. He added that the planning committee of Northam Urban Council had approved the plans the day before and work was to start immediately.

As chance would have it this announcement came a week before the annual meeting of the local Ratepayers’ Association which was held in Lewis’s café, Westward Ho! A ‘crowded meeting’ registered their ‘strong criticism’ of the plan and they passed a resolution opposing any scheme that affected the setting of the Kipling Tors which even then was in the ownership of the National Trust. This meeting was followed up by a petition which attracted 540 signatures.

Two weeks later the decision of the Northam Planning Committee came before the full council for ratification when councillors T.Fulford and G.Hutchings expressed surprise at ‘the way it had been rushed through’. They also raised the problem of water supply which was already in short supply for residents each Summer. Their protests, however, were over-ruled with councillor P.W.Harris moving acceptance, with councillor Horace Ford seconding him. The vote was 11-3 in favour and this seemed to be an end to any further discussion – yet in March the council convened a special meeting to consider ‘correspondence in connection with the proposed camp.’

This began with councillor Reverend A.Green calling on any members ‘who had any interest or anticipated having any interest in the camp to declare that interest.’ No-one did and the Clerk then read out various letters from ratepayers opposed to the scheme. One from M.Fuller stated ‘If the councillors in favour of the proposed holiday camp would talk to some of the people in Westward Ho! who earn a living by apartments, the grief and despair of these poor souls would move them to compassion.’ Another reckoned that the Knickerbocker Travel Federation had withdrawn from the scheme whilst Northam Chamber of Commerce ‘forwarded a resolution viewing the scheme with great alarm, and urging the Council “not to kill the goose that lays the golden egg”.’

Councillors then chewed over these points and agreed by 9 votes to 3 to approve the plans with a few conditions including that ‘no bar, no club, or intoxicants licence shall be obtained’ which might strike us as odd given that it was to be a holiday camp. In the same issue of the Journal carrying this report it was also noted that building had begun almost immediately permission was granted.

Woolaway’s of Barnstaple had been awarded the contract and they were bringing 150 ‘local’ hands to work on the site. The directors were listed as J.Cole (‘gentleman’ of Ashreigney), T.Woolaway (builder of Barnstaple), John Titler (company director of Wadebridge), G.Braddick (furniture manufacturer of Bideford), Alex Tucker (butcher of Westward Ho!), and L.Braddick (Bideford) – the latter being the company secretary. Herbert Lethbridge (provision merchant of South Molton) and Albany Hayne (company director of Moretonhampstead) joined the board within a fortnight. Capital for the new company was put at £40,000 and Mr.A.Moon the architect who drew up the camp’s plans was also appointed Manager he having filled the same post at the NALGO camp in Croyde.

By early April G.Braddick had cut the first sod on the site and work began in earnest – to the extent that the Journal of June 8th was carrying an advertisement offering bookiungs -which showed great confidence in the ability of Woolaway’s to fulfil their contract on time!

The speed at which construction was taking place was further highlighted when a week later Bideford town council unanimously accepted an invitation to attend the opening of the camp on June 30th – just three months after the go ahead was given. Northam councillors similarly accepted the invitation – and suggested ‘that some of those who had opposed the establishment of Westward Ho! holiday centre were pleased with it now’ although what evidence there was for this wasn’t stated.

The Journal of 29th June saw news that the camp was finished and the directors had invited Belle Chrystall ‘the Associated British Film Company’s famous star’ to actually open the new attraction. She was apparently ‘Britain’s No.1 out-door star’ – and no I’m not sure what that meant either. The report also noted that Woolaway’s had had 600 men working on the site at peak times – with another 150 producing components at their Barnstaple headquarters. This immense labour force was responsible for the chalets, ‘communal dining hall to seat five hundred’, recreation hall, café, shops, billiard rooms (with three tables), four tennis courts and a sun lounge.

The actual opening ceremony occurred on Friday 30th June when thousands lined the route leading to the camp to see Miss Chrystall open the buildings using a ‘golden key’ in front of 700 invited guests. The only words of hers the reporter noted were the rather anaemic ‘I hope the sun always shines on this lovely Centre and on the visitors.’ The Mayor of Bideford, H.W.Greenwood, added that in his opinion these new-fangled holiday camps ‘were attracting increasingly large numbers of holiday makers, and the Directors had had the pluck and sagacity to build that Luxurious Centre in their part of the community.’

Amidst all these celebrations, however, was just one jarring note. In the same issue as the opening was covered it was also reported that Northam councillors had been discussing whether the new camp should be used to accommodate evacuees in the event of war breaking out. In actual fact the camp was taken over and housed various groups of service personnel including elements of the Army’s Pioneer Corps made up of German and Austrian Jews who had fled from Hitler. Not perhaps the tourists the camp had been built for – but following the war the camp reverted to its original purpose and served the community well until it was demolished after an always interesting existence.

More information (not all sources known):

The Top Camp was owned by TRAVCO (CO-OP) and stood on the headland overlooking Westward Ho!

It was demolished in the 1980’s to make way for Houses and Bungalows to be built.

Top Camp was a very busy and popular centre for visitors and locals. Many big dances were held there like the Hunt and Police Balls, and local factories held their parties and functions there. Many well know bands and entertainers came including Coco the Clown (he was billeted here during WW2), The Royal Marines Band, Ray McVeigh, Eric Delaney to name a few.

Mike Hudson was first a Blue Coat there and later Entertainments Manager 1970-82 and remembers that during the first four weeks of the holiday season there would be entertainment for the disabled visitors.
Mrs Jean Bissett (nee Eddy) was a worker at the Camp having moved here for her first job in 1960, and is still a resident of Westward Ho!. The staff were well looked after and were taken out on their days off to various places, and also enjoyed the facilities at the Camp, and later a swimming pool was built.

The accommodation for the staff was in a property called ‘Old Stone’, a house not far from the camp.

The History Group think it could be related to finding of a Saxon Church in the area. The remains of a Stone Cross have been found placed in a wall belonging to the cottages of the Pig on the Hill Public House.

Mr and Mrs Percy Reed of Appledore are sitting down in the left-hand corner. Mr Reed (who was a clerk with the Northam UDC) is the 3rd person along, looking straight into the camera with Mrs Reed somewhat hidden behind him [30.6.39]

Souvenir of the Grand Opening: 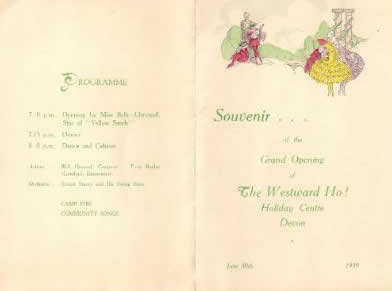 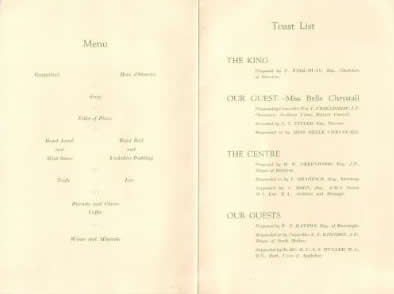 1939 – Alex Tucker snr sold the land and Woolaway built Top Camp, Albert Moon the was the architect and designer. Leslie and Hubert Braddick furnished it.

March 28 1939 in the Bideford Gazette reads as follows:

A unanimous resolution protesting against the proposed holiday camp at Westward Ho! was sent to Northam Urban District Council by the Northam and Westward Ho Chamber of Commerce from their annual meeting held at the workingmen’s club Northam on Thursday evening the resolution reads as follows: That the Chamber after due consideration views with great alarm the suggestion of such a camp at Westward Ho.

Westward Ho is an ideal place for a quiet and restful holiday and is unsuitable for a camp of this description, and went on to say that ‘there is an overwhelming majority against the camp in Westward Ho!

Westward Ho! pays more than a third of the rates to the whole district.

We back your council against the scheme.

Another piece reads Mr S M Barrett stated that he had written to chambers of trade towns where holiday camps had been set up and replies were not favourable to such schemes, going on to say that the class of people that come to such camps bring a lower element to the promenade and town and keep other visitors away.

Many letters of protest had been written to Northam Town Council from local residents and traders when the plans for the camp were first suggested.

When World War II was imminent Top Camp was commandeered for war accommodation. After the war the Co-Op were interested and it was sold to them.

The following people have provided memories and photographs of Top Camp, please click their names for their stories:

You can view a copy of an original Top Camp brochure – it’s a 4 mb .pdf file: Top Camp Brochure

Or the individual pages here: