A Treatise on the Westward Ho! Pier 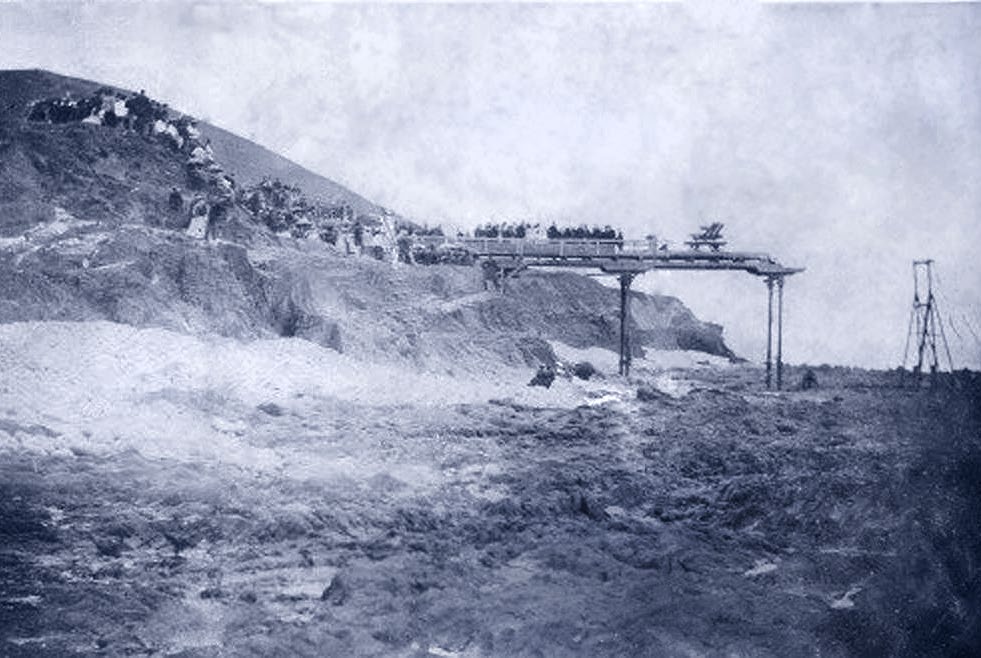 When I first moved to North Devon nearly fifty years ago I occasionally looked at the pier posts that are exposed at low tide and imagined the pier extending out to sea from there.

Of course I was totally wrong. These posts are at the end of the pier; it’s head, not its start. They represent a pier head that in design would be; wide enough for refreshment rooms and a bandstand. (For some sources see the foot-notes). So then the question arises; just where was the start of the pier?

Initial reports say the pier was to be 600 feet (200 yards) long. Perhaps this was quoted from the prospectus of The Northam Burrows and Landing Pier Company when it was floated in 1864. It appears that 50 feet (17 yards) was trimmed from this length by the time it came to the start of building the pier. (June 1870, Gooch, builder, J.W. Wilson, Engineer). The pier suffered serious damage even while it was being built. (In October 1871). According to one newspaper report a lucky construction worker had to be rescued from the sea!

About this time the builder was changed from Gooch to W & J Abbot of Bideford. Perhaps in the light of these experiences a further 50 feet was lopped from the original 600 feet to make the final length 500 feet or 167 yards. Apparently tests were made that showed there would still be fifteen feet of water at normal low tides for boats to berth. 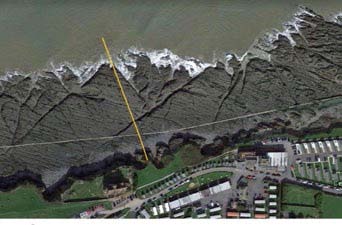 The first landing of sixteen (brave) passengers had already been made as a test from the Spicy of Bideford in July of 1871.

The pier finally opened for business properly in July of 1873 when a celebratory buffet was held upon it. But let us return to finding the source of the pier. Is it still there? We could measure back from the far end of the posts and see where we end up. But that is not easy – nor is it necessary – for we are told that the pier projected from a promontory: just east of Seafield House. Here we must bear in mind that Seafield, (the haunted house), was not built until about five years after the pier was demolished in 1880. Never-the-less at last I could now stand east of Seafield House in line with the posts and imagine the pier on its stalk-like legs stretching out from the cliff-top to the sea.

Well not quite! As my friend and local historian David Gale pointed out, there is a photo of the initial plank laying ceremony that shows people descending the cliff to arrive at the pier. (August 1870). The start of the pier therefore was not from the foot of the cliff, nor was it from its top, but from a point midway. When we look today there is in fact a fairly flat rock promontory beside Seafield that I am sure was once the site of the entrance to the pier with its ornate twin cabins either side.

The whole structure may not have been quite as grand as the photographs tend to show or that I had imagined. They say a camera never lies. Well maybe not, but they can certainly be made to mislead. Victorian photographers changed their lenses very cleverly and the developers of the photographs were as creative as any artist! Take the famous and most common image of the pier that shows the entrance and its two ornate cabins. About 1870. (Probably 1873 or later). If my theory is correct then there must have been steps of some sort down to that gated entrance. The area in front of the gates in the photograph has been doctored in some way. And even allowing for the changes that have happened to the landscape around here since 1870, it is difficult to see how it would have been possible for the photographer to get such an angle as this. Has all the ground that the bogie-wheeled crane is standing on disappeared? And there is a man-fashioned wall to the left, just where is that? O.K. I know it could have long ago fallen into the sea but even the chap leaning nonchalantly against the cabin looks suspicious to me! 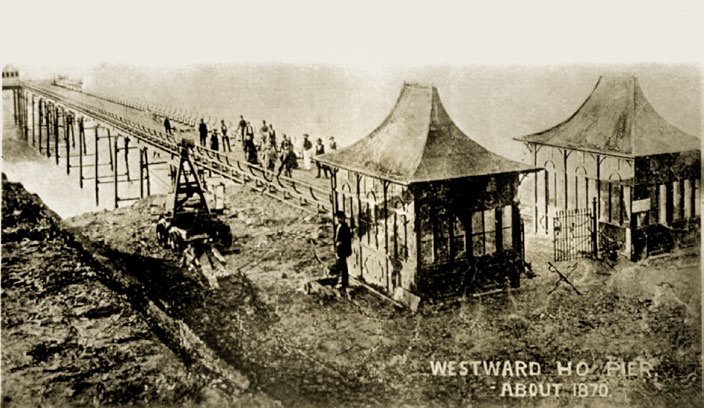 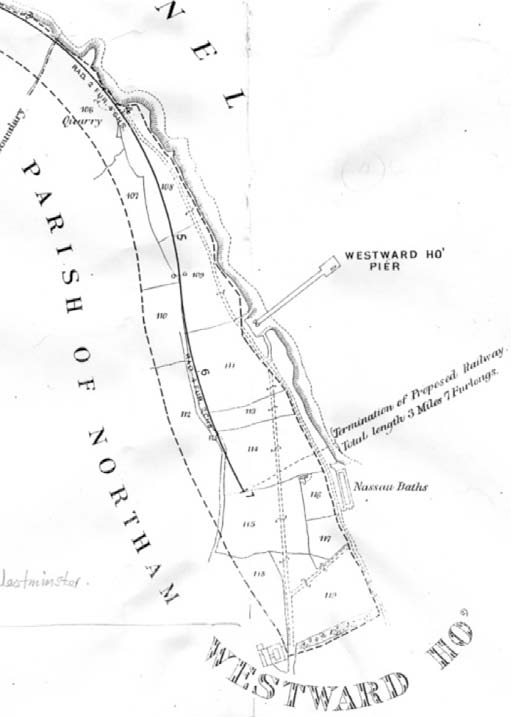 Although perhaps not as grand as I had imagined, the pier was still a formidable if somewhat foolhardy undertaking. Originally the plan was to terminate the railway near here, a little past the pier at the start of the Nassau Baths. (See plan, undated but believed to be 1875).

What evidence exists today for the supposition that the pier commenced from the rock plateau against the cliff? There is no trace of pole-holes or man-made structures actually on the rock that I can find. Nor have I been able to find the remains of any post-holes or structures on the beach in front of it, although I have searched carefully. I have, however, found a short length of curved beaded cast-iron that I believe to be a part of the side rails of the pier that can be seen in the photograph above. The metal was about to break away and would have been lost for ever had I not found it when I did. It was found where there are other ornate sections of iron imbedded in the concrete at the cliff-face level with the plateau. In addition;

In my searches I have located two pairs of post positions at the far end of the pier, before its head in the sea. They are, as measured crudely with a tape-measure, 31 feet spaced between the pairs and 15 feet 3 inches between centres side to side. That corresponds very nicely with the quoted 16 foot width of the pier. In addition the two landward posts have short iron stays in line with them either side that presumably were the anchors for wire supports.

Google earth also shows that the width of the pier-head from the outer standing posts to be an impressive 44 feet. Room indeed for a café and a bandstand! I can only imagine how they would have fared though, knowing the few really warm, wind-free days that we get at Westward Ho!

There may be further posts or evidence of them to be found on the fore-shore today but I have so far not been able to find any. Perhaps a hundred and forty years of pebbles being dashed against the shillet have removed all trace of the pier near the beach. Certainly the waves and the pebbles thrown by them made short work of yet another two of the cast-iron pillars in a storm in 1880. This was the proverbial last straw and the owners finally gave up and the pier was demolished a few months later.

On the 25th of August 1886 Dymond and Son of Bideford held an auction. They listed; 26 9” by 32” box section girders, 122 seat ends, columns, brackets, tie rods etc. The sale was directed at Engineers, Builders and Scrap Metal Merchants. Such was the ignominious end of the Westward Ho! pier. 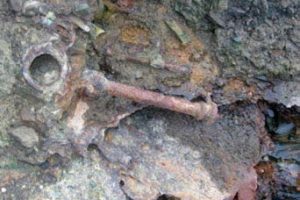 Iron scrap. Seafield side of the platform. 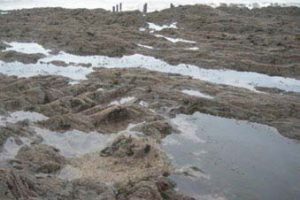 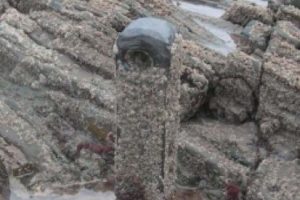 One of the support posts. 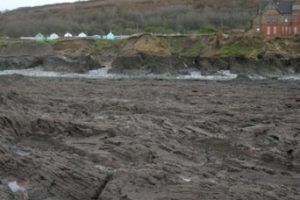 Looking back to the platform. (Centre).

Some additional images of the pier remains 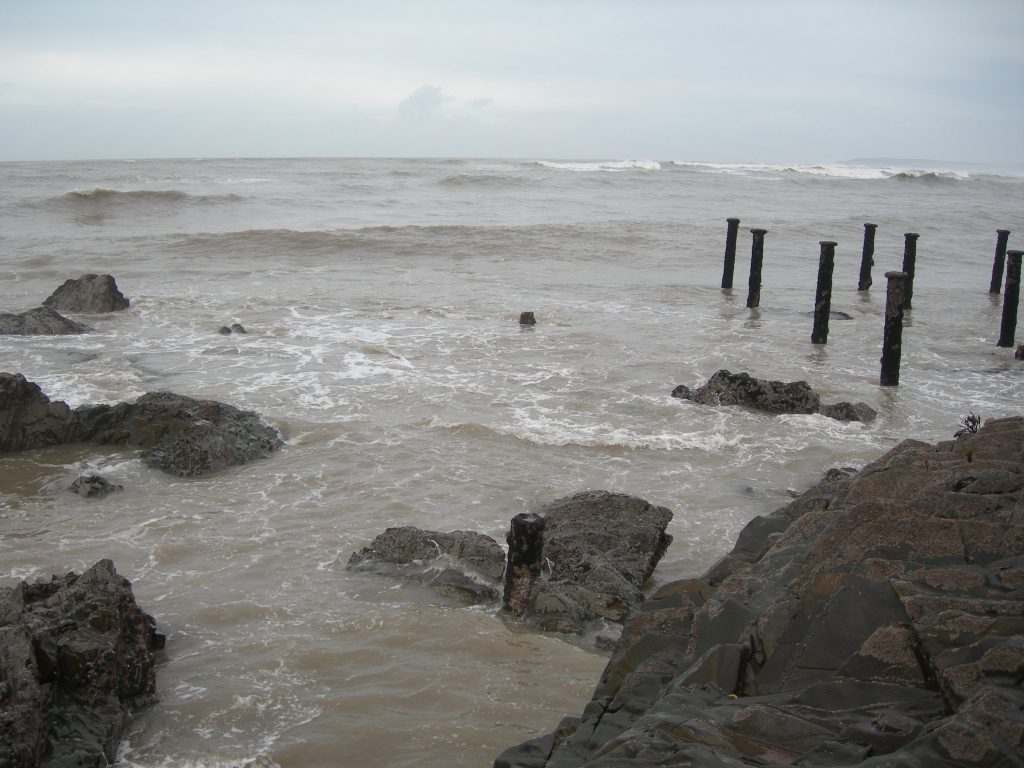 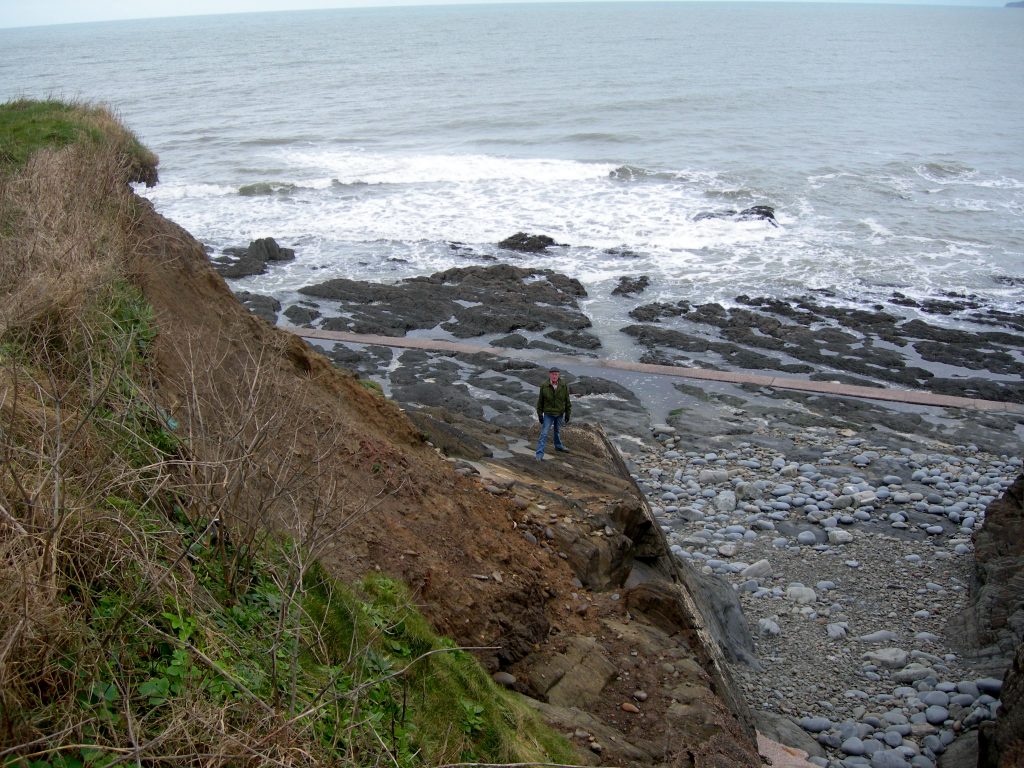 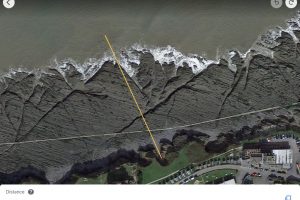 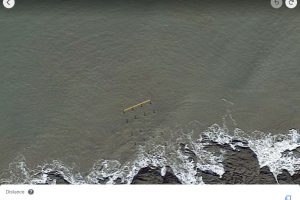 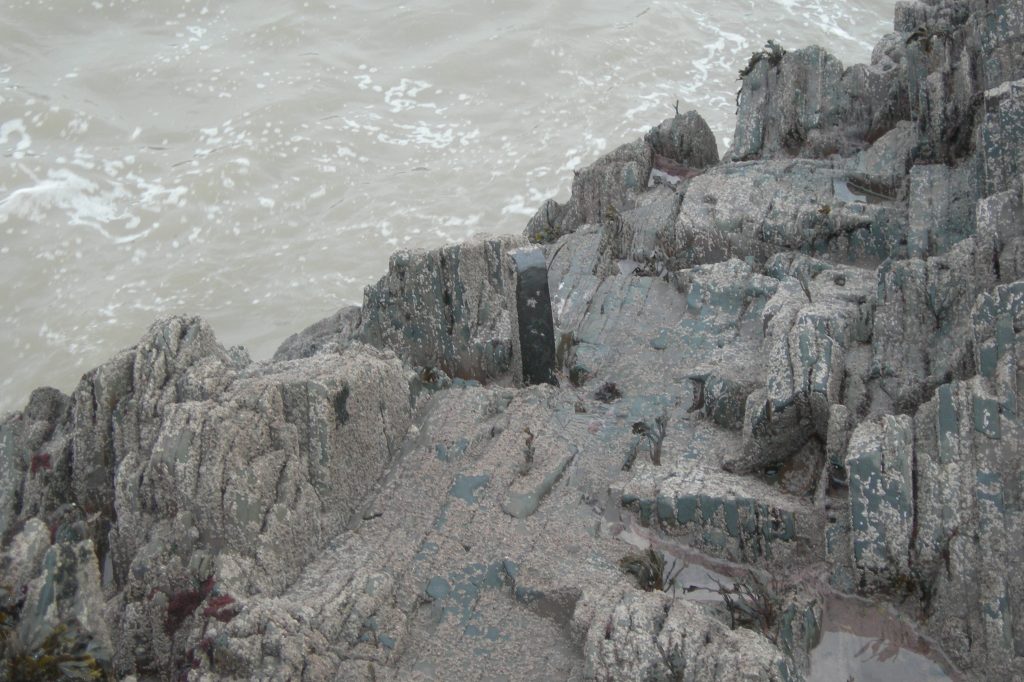 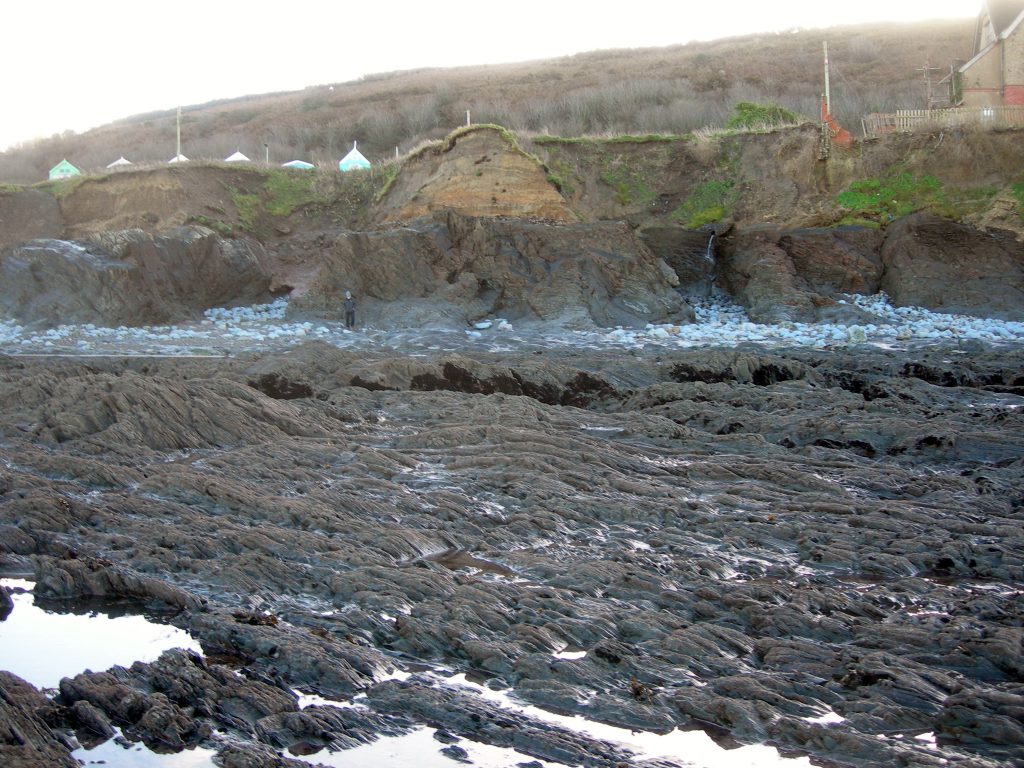 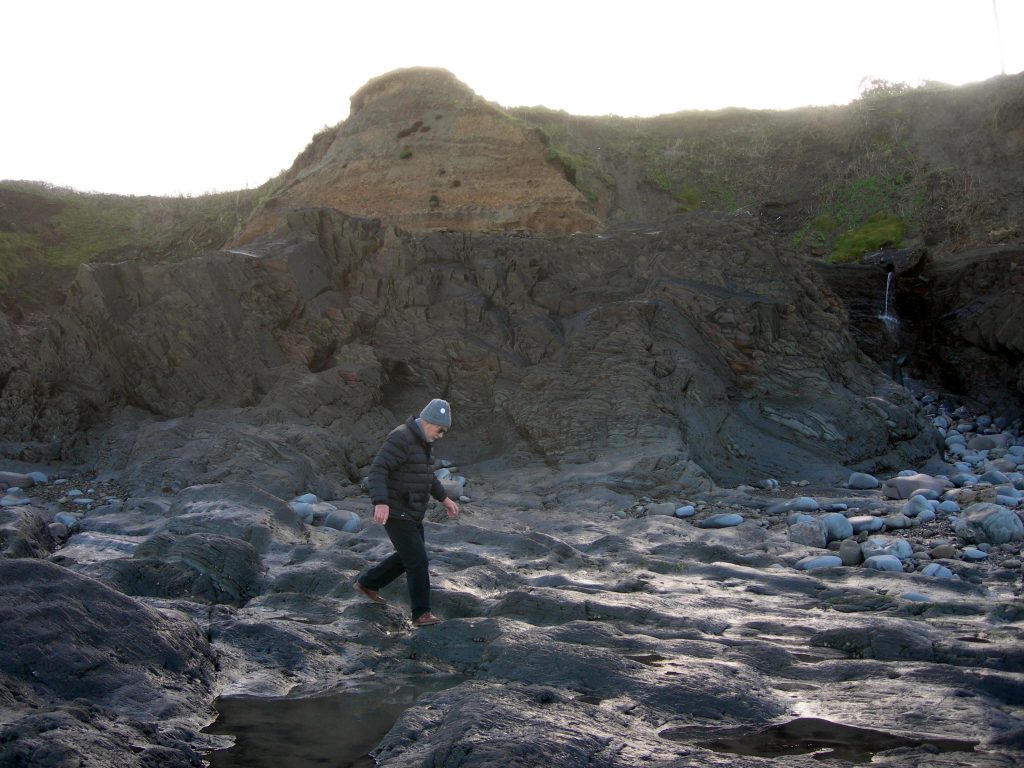 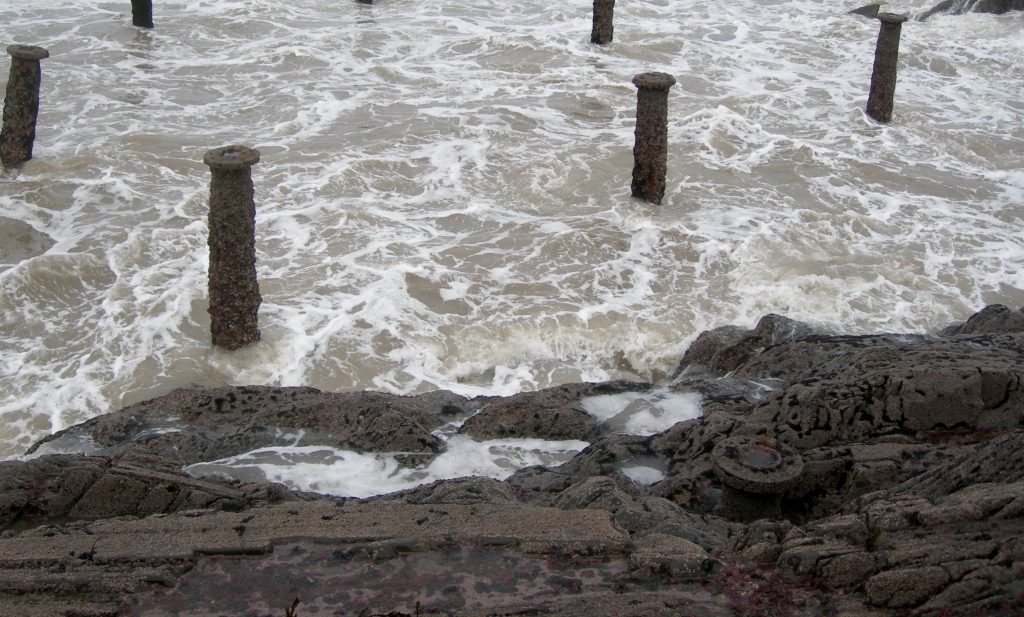 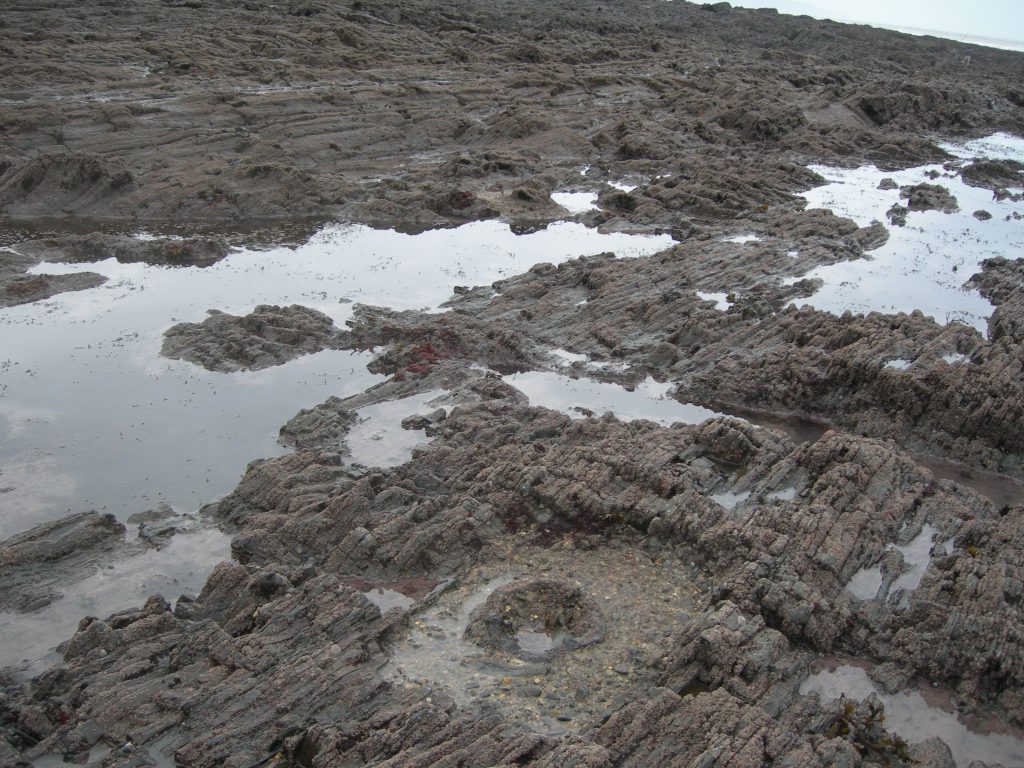 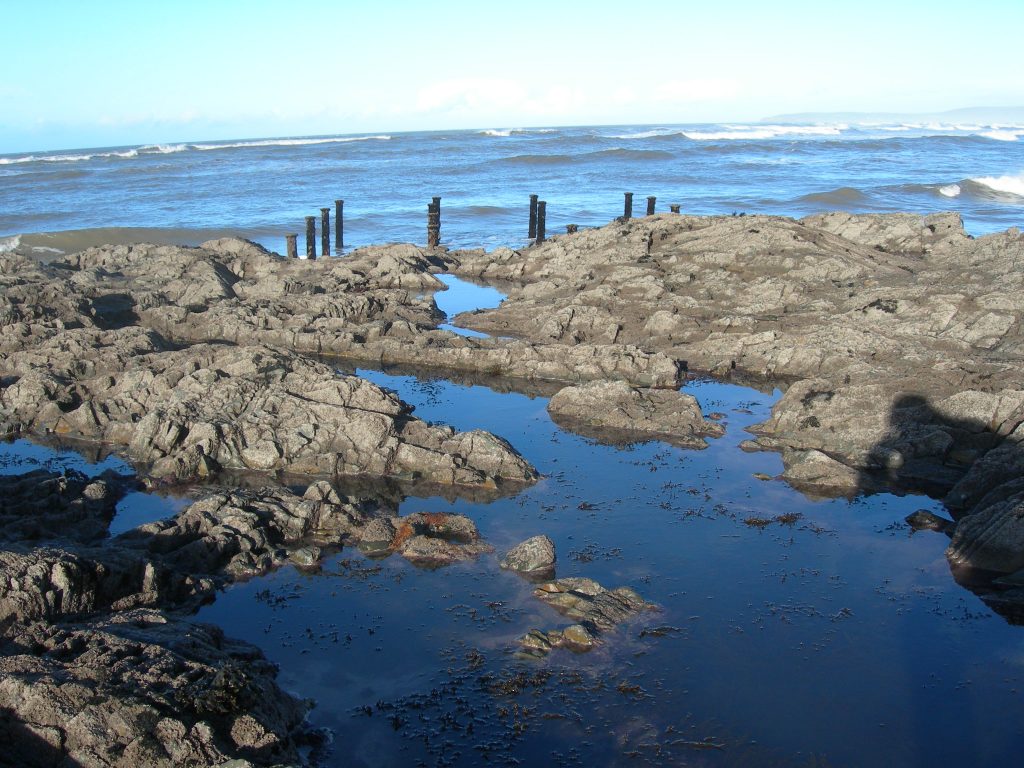 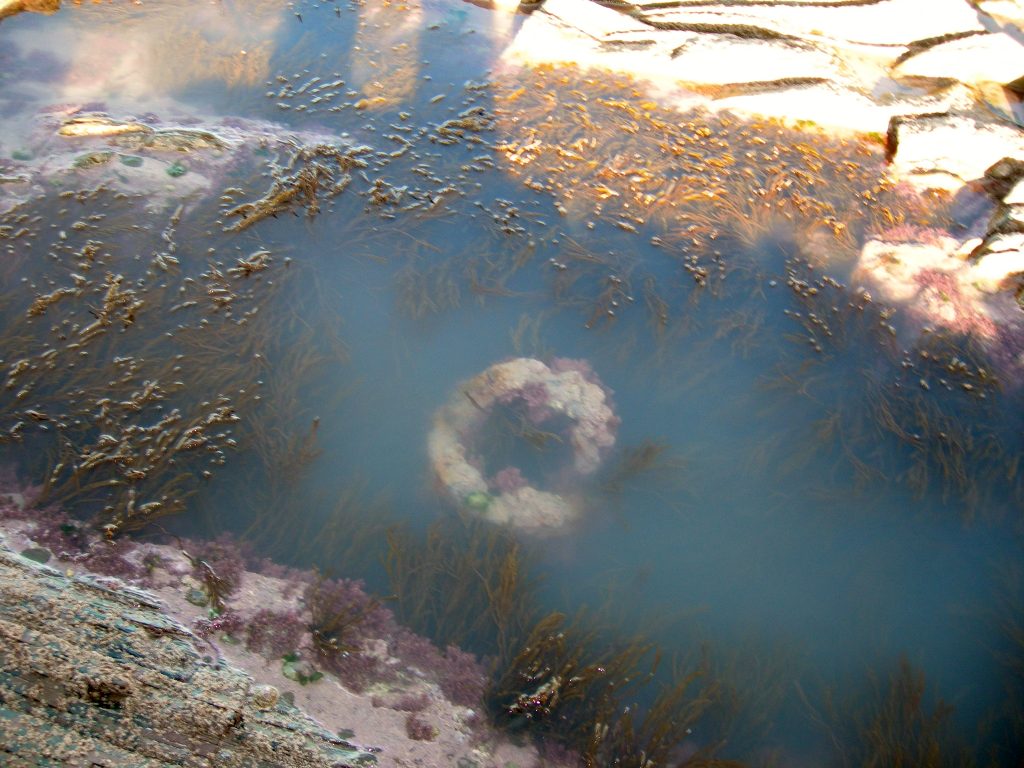 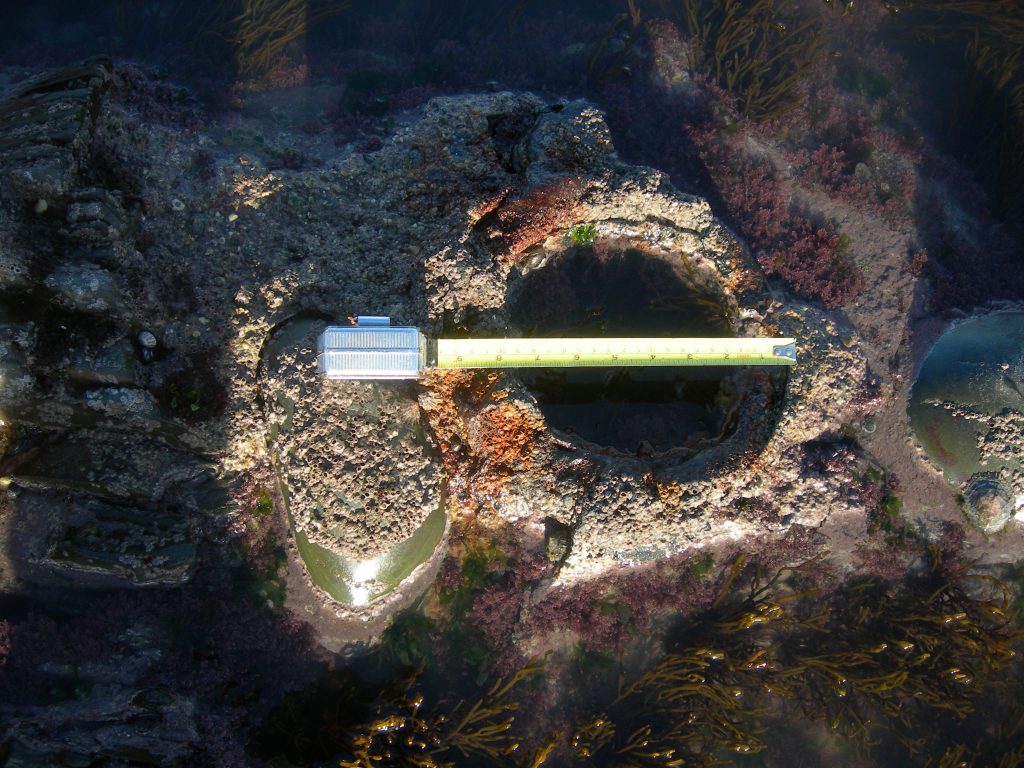 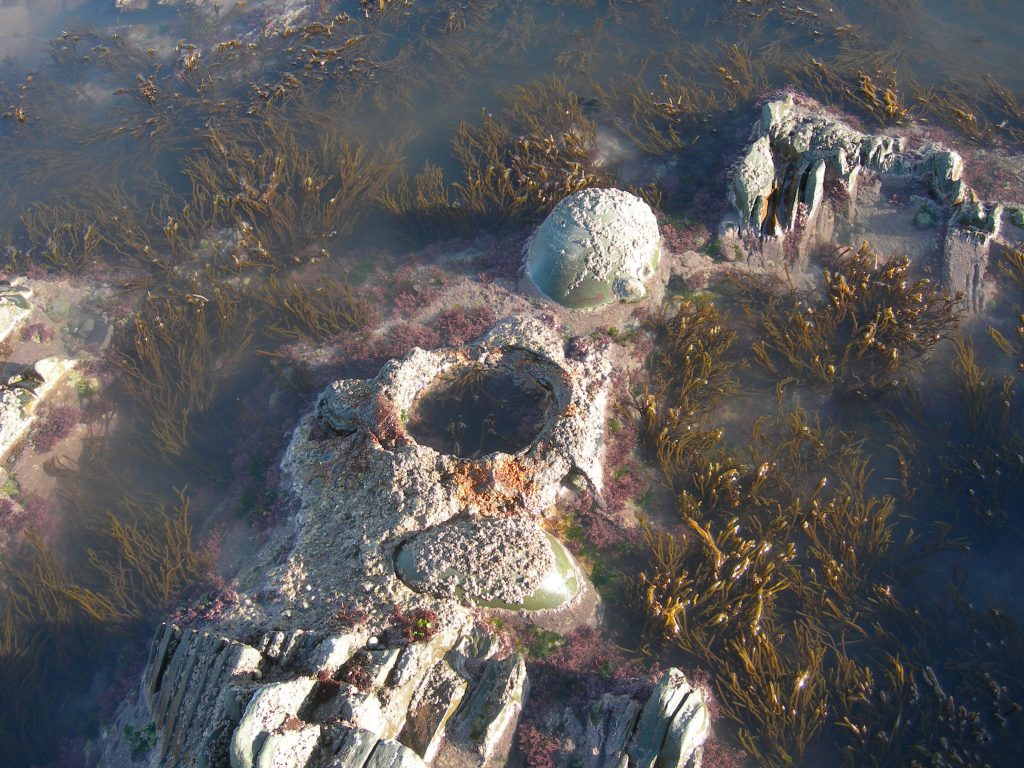 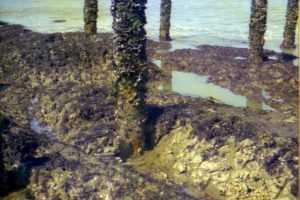 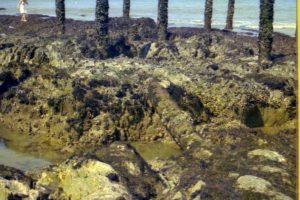 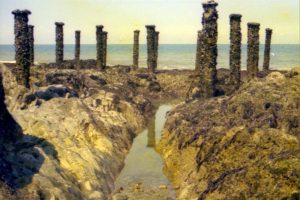 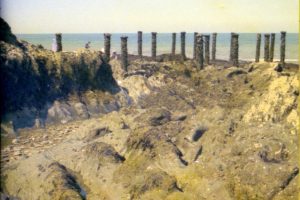 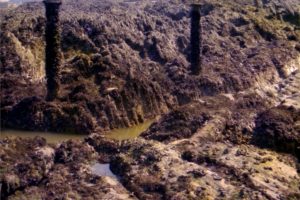 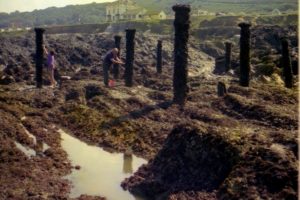